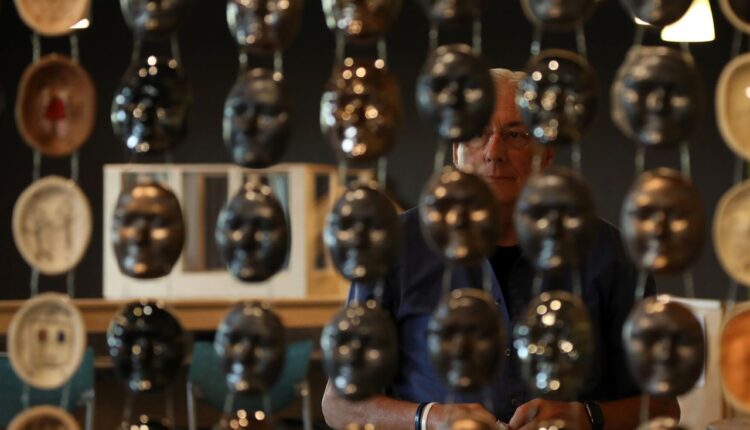 GRAND RAPIDS, MI – Churches in downtown Grand Rapids have long been opening their doors for ArtPrize visitors to view the work of artists competing in the 18-day international art competition.

The reasons range from putting the spotlight on social justice issues to seizing the opportunity to raise awareness and encourage dialogue on sexual assault trauma.

She said the church has a history of progressive politics and artists and viewers have come to expect a politically-charged gallery.

“We’re not really interested in collecting religious artwork, it’s not about that,” said Barstow, noting their main interest is finding artists who are interested in social justice.

One of the pieces on display at the church is “Through the Veil,” a portrait painted by students at East Kentwood High School of Patrick Lyoya, a Congolese refugee who was shot and killed by a Grand Rapids police officer on April 4, following a traffic story. Christopher Schurr was fired and is charged with second-degree murder.

First Park Congregational Church, 10 E. Park Place NE, has been involved with ArtPrize since 2010. The church has 44 pieces of artwork this year

Doris Robie, a member of First Park Congregational Church and ArtPrize volunteer, said the church sees an increase in traffic during the event and members hope that will bring awareness to upcoming events hosted by the church.

“I think it’s just word of mouth getting out about Park. We do more community stuff than just Artprize,” she said.

Artist Jim Triezenberg said First Park is the perfect place to display his entry “The Nature of Invention.” The life-size tree sculpture requires viewers to use a wand to activate 52 individual robotic elements generating noise, light and movement.

Triezenberg said the piece wouldn’t be as successful in a smaller venue because it requires open space to be fully enjoyed.

Related: Your guide to ArtPrize 2022

Monroe Community Church Leader Steve Fridsma said the church, which displays artwork throughout the year, has been at an ArtPrize venue since 2009. He said he sees ArtPrize as a way the church can relate their teachings to relevant issues in the community.

Fridsma said the artwork on display influences the topics they discuss in worship ceremonies. This year, he said they are featuring some ArtPrize pieces dealing with overcoming sexual assault trauma.

“We want to amplify the voices of these three artists who have dealt with this,” Fridsma said. “They were very brave in creating these pieces.”

Artists Marti Liddle-Lameti, Linda Litteral and Lucy VanRegenmorter have artwork on display at the church and recently participated in a talk-back explaining how they use art as a means to overcome their trauma.

Liddle-Lameti’s said Monroe Community Church is the best venue for her entry “Resilience” because it helps her to better connect with her viewers.

“It’s a little more personal. When you go into some of the venues, they’re so big and you really can’t communicate with the artist as well” Liddle-Lameti said.