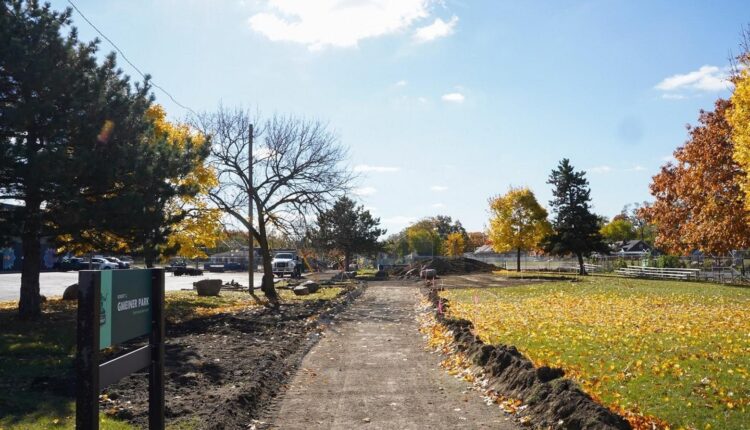 What’s happening: Efforts are underway to reinvigorate Gmeiner Park, a 10-acre park in Northwest Detroit. Work crews from the Pontiac-based Re-Tree were already out in November, donating and planting 17 relocated mature trees that were destined to be clear-cut due to development. But that’s not all organizers have in store for the park located near the intersection of Wyoming Avenue and Seven Mile Road.

What’s planned: In addition to the gently-used trees, Gmeiner Park is getting new picnic areas with new picnic tables, grills, bike racks and benches, a walking path, and a playground. Improvements are planned for the greenspace and an existing baseball diamond there. And Project EverGreen, the Ohio-based nonprofit primarily responsible for the work being done here, will produce informative and educational resources to support community-led care of the new-look park.

Source: ProjectEverGreen.org
Who’s involved: The revitalization of Gmeiner Park’s greenspace and tree canopy is led by Project EverGreen as part of their GreenCare for Communities initiative, a national initiative first launched in 2008 that has since restored nearly 200 million sq. ft. of green space throughout the country. Partnering with Project EverGreen on the restoration of Gmeiner Park is the City of Detroit, Ralph C. Wilson, Jr. Legacy Funds of the Community Foundation for Southeast Michigan, and the Gilbert Family Foundation.

One more partners: Project EverGreen has been accepted into the Michigan Economic Development Corporation’s Public Spaces Community Places placemaking initiative. Should they successfully raise $50,000 through a crowdfunding campaign by Thursday, Dec. 22, the MEDC will contribute an additional $50,000 by way of a matching grant.

The Gmeiner Park crowdfunding campaign is being hosted on the Michigan-based Patronicity platform.

Why it’s important: “Parks play a vital role in the health and well-being of youth and adults alike, a fact never more evident than during the pandemic. Connecting people to their parks enhances social well-being, relationships, safety and environmental health,” says Project EverGreen Executive Director Cindy Code. “Together with the generous grant from the Michigan Economic Development Corporation’s Public Spaces Community Places grant program, we can create a healthy, thriving park for the Gmeiner Park neighborhood for generations to come.”

Got a development news story to share? Email MJ Galbraith here or send him a tweet @mikegalbraith.