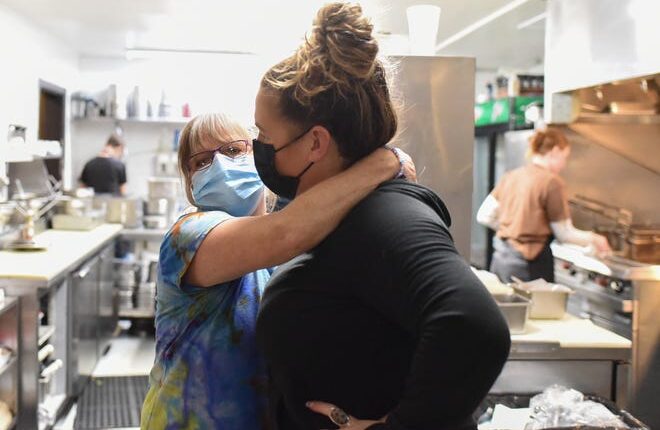 After 40 years at Weston’s Kewpee, Tammie Bunker is at the heart of Lansing eatery

In the century since it opened, Weston’s Kewpee Sandwich Shoppe has become synonymous with Lansing.

The South Washington Square restaurant’s history is intertwined with the Weston family, who opened it in 1923, and its signature taste is found in its olive burger.

But the eatery’s heart and soul are embodied in Tammie Bunker.

Gary Weston hired her nearly 41 years ago, just after Bunker graduated from Eastern High School. Her vivacious personality and ever-present giggle have been constants at Weston’s ever since.

“You can hear her laughter right now,” Gary Weston said, on a Monday afternoon from a seat inside a booth at the restaurant. “Do you hear that laugh? That’s Tammie.”

Bunker stood behind Kewpee’s front counter serving customers and chatting with the staff, her laugh carrying into the dining room.

“I only know this place with her,” said Autumn Weston, who took over running the restaurant from her father Gary 15 years ago.

Today, Autumn Weston listens for the sound of Bunker’s laugh every time she walks into the eatery.

“You can’t duplicate that laugh,” she said. “You come into Kewpee’s and you get her giggle.”

Bunker’s been that way — bubbly, patient, friendly and hard-working — for four decades in an industry that’s ever-changing and which can be “very humbling,” Gary Weston said.

But it hasn’t been that way for Bunker, 58, who admits she didn’t start out intending to work at Weston’s Kewpee Burger this long. Then she fell in love.

“I love it,” she said. “I love my customers and the Westons are family.”

‘…I never thought of going anywhere else’

When she was little, Autumn Weston looked up to Bunker, who she remembers often wore colorful outfits to work that matched the season or holiday. In the summer and in between seasons, Bunker wore colorfully tie-dyed shirts.

“She rocked every holiday. For Halloween, she celebrated all month. She’d have all the Halloween or Christmas gear depending on what holiday it was, and she had the longest ponytail and her bangs were as close to heaven as you can get, ” she said. “As a kid, I thought, ‘She’s so cool.’ She truly is a whole vibe.”

When Weston, the fourth generation of her family to run the Lansing institution, started working at the restaurant, Bunker became a sort of teacher, sharing 40 years of know-how about the business, the building and its customers.

Bunker was 18 when she started working for the Weston family in March 1982. The restaurant was located off Pennsylvania Avenue then.

“I started in the kitchen,” she said. “That’s where they needed me so I was doing everything, like calling orders and the drive-thru window. It was a little kitchen, smaller than here.”

Three years later, Bunker started waiting tables and serving customers. Bunker, who lives in Dansville, married her husband Rick in 1985 and they raised their son, now 33, while she worked at Weston’s.

Today she does just about everything, working behind the counter and sometimes, opening and closing the restaurant.

“I’ve liked it ever since I’ve worked here,” Bunker said. “I’ve had a lot of customers that I’ve watched grow up from little to probably 40 years old. I never thought I’d be here this long, but I never thought of going anywhere else.”

So much about the job hasn’t changed, she said. “We still write up the tickets on paper,” Bunker said, and she still wears tie-dye, and dresses up for every holiday.

The biggest changes and challenges of her career happened during the COVID-19 pandemic, Bunker said. She worked through the beginning of it in March 2020 when dining rooms were shuttered, filling curbside orders with Autumn Weston and one other employee.

“I said, ‘I can do whatever you need me to do,'” Bunker said. “It was just the three of us for a long time and we were busy because we had phone orders and we cooked. You know, we did everything.”

Five Lansing-area entrepreneurs to watch in 2023

“The restaurant industry isn’t for the thin-skinned,” Gary Weston said, and Bunker isn’t that, but her dedication and enthusiasm for the job go beyond that.

“If you waitress for over 20 years, sooner or later the wheels fall off,” he said. “She’s not burned out.”

She still mentors new employees, including Brady Altherr, 20, who started working at Weston’s Kewpee Sandwich Shoppe a few months ago.

Bunker trained him on his first day on the job.

“She definitely takes customer service up to a whole new level,” Altherr said.

Bunker is also like family, Weston said. The restaurant is too quiet when she’s not there, she said.

“I don’t think of her as an employee,” she said.

Bunker feels the same way about the Westons.