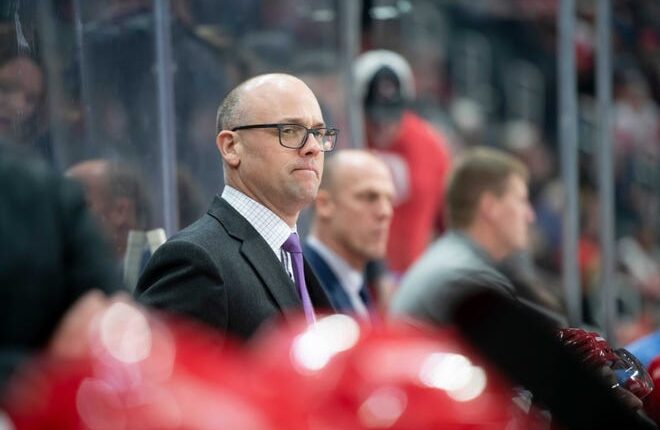 Tampa, Fla. — It seemed like old times to a certain extent.

Jeff Blashill addressing the media, talking about hockey. But then you noticed the Tampa Bay Lightning gear, and Blashill isn’t the head coach in Tampa, he’s an assistant on Jon Cooper’s staff and was essentially filling in for Cooper Monday afternoon.

Also, knowing the Red Wings, the Blashill team coached for seven seasons (204-261-72) before not being retained in April, are here Tuesday playing the Lightning.

Blashill, who spent 11 seasons in the Wings organization either in Detroit or Grand Rapids (2013 Calder Cup champion), admits it’s going to be strange.

“Certainly it’ll be a little different emotions coaching against an organization I spent that much time with,” Blashill told reporters. “Honestly, I hadn’t thought much about it until yesterday, coming into today.

At the pro level, this is the first time Blashill can remember going through an experience like this one, facing a team he’s so closely attached to.

“It’ll be different,” Blashill said. “I can’t tell you how I’m going to feel until we’re in the middle of it. A lot of guys, a lot of players in that room, I’ve coached a long time. Obviously the staff I was with throughout. It’ll be different. It’ll be interesting what those emotions will be like.”

The irony of the entire matter is, Blashill took over Derek Lalonde’s assistant coach’s position in Tampa, while Lalonde replaced Blashill as the Wings’ head coach.

Further, the two have been friends since roughly 2002 when Lalonde replaced Blashill on the Ferris State coaching staff, after Blashill took an assistant coach’s job at Miami (Ohio).

But switching jobs at the NHL level, yes, that has been odd for the two friends.

“There’s some awkwardness to that, there’s a lot of emotion that goes into all that stuff, and when you leave an organization it’s a hard thing,” Blashill said. “I’ve spoken with him through the last couple of months at different times and there’s some awkwardness there, that we filled each other roles and that doesn’t happen very often.

“But at the end of the day he’s a good friend, with a great family, and I hope he’ll say the same thing about me.”

Blashill has been impressed with the Wings’ play thus far. The Wings are only two points from Tampa in the Atlantic Division standings.

“There’s been times this year where I went to look at the stats and I thought I was looking at the wrong team,” Blashill said.

Tampa plays at Little Caesars Arena on Dec. 21, and Blashill said that might be a different sort of feeling than Tuesday.

“There’s probably some reality to that, going to Detroit would be different for sure,” Blashill said. “Walking into the visitor’s room, that’ll be a different feeling, obviously. To a large degree, the chapter closed last June, but it will be good to kind of, once these games are over with and moving on past them just from an emotional standpoint.”

Blashill also has known Cooper for a long time, and the two have been longtime friends. Coming to an organization like the Lightning, who have been to three successful Stanley Cup Finals and won two of them, has been a positive experience as well.

“I’ve thoroughly enjoyed being part of this staff,” Blashill said. “There’s a collaborative effort that goes on in the coaching room, there’s a lot of smart guys back there, and really good people. I like to coach and I’m not worried about titles. I like to have impact on teams and hopefully as the year goes on, I’ll have a positive impact on this team.”