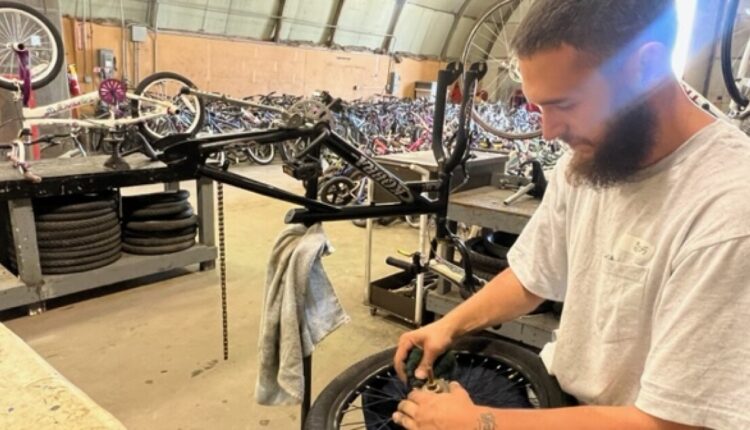 KANSAS CITY, Mo. — A partnership between the Gardner Police Department and inmates at the Lansing Correctional Facility is continuing to help children in need by giving them repurposed bikes during the holiday season.

Throughout the years, people living in Gardner and the surrounding area took unwanted, broken bikes to the Gardner police station. Many of the bikes don’t have handles, some have rusted chains, ripped seats or flat tires.

Retired Sergeant Lynn Atchison with GPD believes thousands of bikes have been donated since the start of the program.

“Even though we’re in Johnson County, there are poverty-stricken families in our community that need stuff and bicycles for kids is huge,” Atchison said.

The program started in Gardner more than 20 years ago, but this year police officers think the need will be greater compared to previous years.

“I think that this year is going to be a big impact since everything’s kind of catching up from COVID-19,” said John Stimatze, Community Officer with Gardner Police.

The bikes are collected by Gardner police and every couple of months are taken to Lansing Correctional, where inmates are ready to fix and rebuild the bikes.

“I take pride in it, every one of these bikes is gonna go to a kid. I don’t want a kid to get a messed up bike,” inmate Darrick Rippetoe said.

11 years ago, a judge sentenced Rippetoe to involuntary manslaughter following a hit-and-run in 2012 .

“Someone lost their life and that’s nothing you can replace,” Rippetoe said.

Rippetoe knows he can’t take back what happened that day, but he says fixing these donated bikes is steering him in a new direction.

“I can work every day to try and do my part, and this is kind of like doing my part,” he said. “I’m helping the kids.”

This year, Emmalee Pham was one of the hundreds of kids and teens who were given a donated bike. Pham says knowing that the people behind their new ride want to break the cycle makes all the difference.

“You don’t really think about people wanting a second chance or getting that second chance,” 16-year-old Emmalee Pham said.

Helping everyone move forward is what makes this ride special, but it only works when everyone works together in tandem.

“It helps everybody, it doesn’t hurt anybody, everyone is able to benefit one way or another,” Atchison said.

KSHB reached out to the victim’s family involved in the hit-and-run and did not receive a response. The family spoke with KC Hispanic News over 10 years ago. They said the death of their loved one was tough, but they forgave Rippetoe and hold no bitterness.

This year more than 150 bikes will be given out.