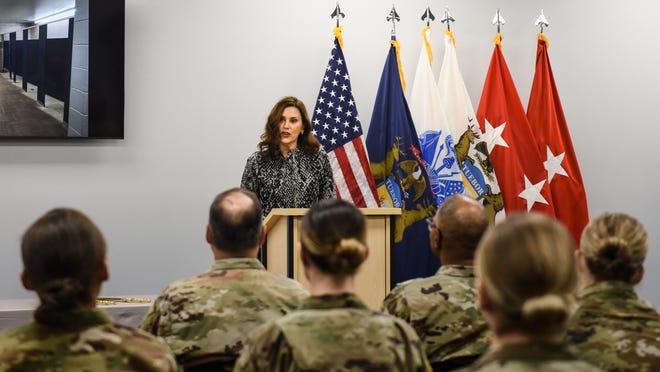 Until recently, about 30 women soldiers shared two bathroom stalls and three showers. The facility added more toilets and showers, as well as lockers and a lactation room for new mothers. The project was a budget priority for Gov. Gretchen Whitmer, who toured the new facilities and spoke to service members Monday.

“Every member of the Guard deserves our gratitude and our support and resources so that they can continue to carry out their mission,” Whitmer said. “I want to just reiterate that I’ll continue to work with anyone who wants to solve problems in the state and support our troops.”

Staff Sgt. Chandra Taylor, a new mother, said the lactation room has been a convenient addition.

“There was nowhere for me to pump before. Now, I have a room that I can go into, take my laptop, work, pump,” Taylor said. “I can still provide for my son and I can still do my job as a soldier.”

The Grand Ledge Armory, 10600 W. Eaton Hwy., home to the 238th General Support Aviation Battalion, is the first of 33 facilities statewide to receive the improvements, according to a press release from the Michigan Department of Military and Veterans Affairs, which operates the state’s National Guard. About $100 million in funds — $50 million from both state and federal sources — were authorized for the projects.

While at the facility, Whitmer bestowed the Legion of Merit to Major Gen. Paul D. Rogers on behalf of President Joe Biden. Rogers received the award for his work as the Guard’s adjutant general since 2019, overseeing COVID-19 vaccination efforts, Midland flood support and responses to civil disturbances and protests.

“Your distinctive service is testament to your character and reflects positively on the whole Michigan National Guard and the US Army, and of course the whole state of Michigan,” Whitmer said.