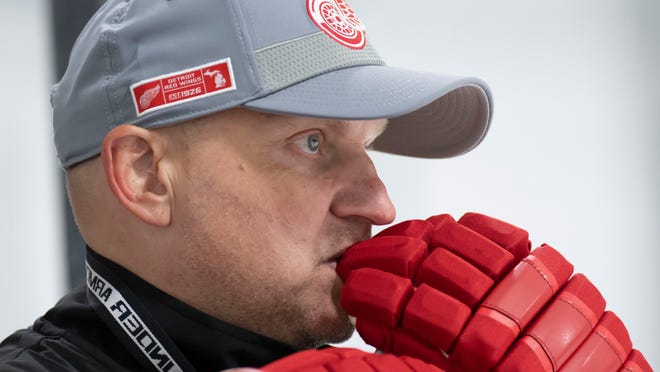 Traverse City − The Red Wings are on to the next step of their hockey journey.

Training camp ended Monday at Center ICE Arena in Traverse City, and front-office staff, coaches and players all headed back to Detroit, with the start of the eight-game preseason beginning Tuesday in Pittsburgh.

New coach Derek Lalonde was pleased with what was accomplished over the four days of scrimmaging and drills in practice in Traverse City. Now, it’s onto some games, more evaluating, and maintaining and improving what was established in this camp.

“Structure, and keep building on our process,” Lalonde said of what his hopes are for the preseason. “Obviously take a step every day hopefully with our structure. Some of it is new for the guys, but certainly establishing some compete, attitude, work on all those things and again, we feel fortunate to have eight (preseason) games this year to start fine-tuning some things.”

Lalonde was planning to give players a certain amount of games, but that plan is already changing by the day.

Injuries to forwards Tyler Bertuzzi, Andrew Copp (recovering from summer core surgery), Joe Veleno and Oskar Sundqvist, and defenseman Robert Hagg − all are essentially day to day − have thrown the lineups into flux, but also give other players opportunities for ice time .

“It’s a little frustrating to see (several forwards) out of our top nine out of camp to start, but it gives opportunity for other guys for some different looks, so that’s a positive in some ways,” Lalonde said.

There are roster spots to be won during this exhibition season, but Lalonde isn’t getting into how many positions might be available.

“(General manager) Steve (Yzerman) and I have talked a few times, we’ve talked about being patient with this, not go too deep about it,” Lalonde said. “I can’t give you any looks or numbers going forward. We’ll take the full eight games and let it play out and go from there.”

More:Here is who stood out in the Red Wings’ intrasquad scrimmage

The eight exhibition games, which is the high end of most NHL teams, come in handy this season with so many players competing for roster spots.

“It really does,” Lalonde said. “We were at about six and the odd seven (games in Tampa, where Lalonde was an assistant coach) and now to me, six is ​​good and seven maybe a little too much, and eight is excessive but I understand there’s a business aspect to it.

“But this year, it’s beneficial.”

Lalonde was pleased with this camp portion of the schedule.

“Everything we put on paper the last two or three months translated very well,” Lalonde said. “To me, it’s a credit to the guys. They were dialed in in our meetings, dialed in within our practices and they went out and executed . Was it perfect? ​​Absolutely not. But, for the most part, I’m happy with how things have gone so far.”

Lalonde has been impressed with forward Elmer Soderblomwho rolled a good prospects tournament into a fine showing into training camp.

“We like what we see,” Lalonde said. “It’s hard not to be excited about the tools, he’s big, strong, assertive with the puck. He’s played a lot of hockey, hasn’t had a day off in seven or eight days, and we’ve asked a lot from him As much as I’ve wanted to have a fresh start for everyone throughout this organization and be open-minded, I also want to be cautious about getting excited about a young player like that.

“But from what I’ve seen over the last four or five days, it’s hard not to get excited. I want to let this play out for him and all of our guys.”

… Lalonde said the Wings will be cautious with Bertuzzi, who had something “flare up” during the weekend. Copp has been skating on his own, but the Wings aren’t going to rush the veteran forward before the start of the regular season Oct. 14

“(With core surgery there are) good days and bad days to it, so there will be times where you’re ou there watching him and he might be sitting around and looking 100%, but it’s how he reacts to it,” Lalonde said. “Our ultimate goal is Game 1 (of the regular season). If he’s available earlier for some reps within the last week (of the preseason), some hard reps, great. But if not, we’ll certainly get him shortly after. We’re in no rush with Copper.”

… Hagg, who took a puck to the head/ear area Sunday didn’t practice Monday. There was a chance Hagg was going to be able to practice, so Lalonde took that as a positive.

There are currently 60 players on the training camp roster: 34 forwards, 20 defensemen and six goaltenders.

… Lalonde had nothing but positives to say about having camp in Traverse City.

“First class,” Lalonde said. “Detailed and on top of everything, just a genuine demeanor. They are good people, they want to say hello and will do anything for you. Really impressive.”

▶Outlook: The Wings open in the eight-game preseason in Pittsburgh. The Penguins had a young roster Sunday in Columbus, losing 5-1.