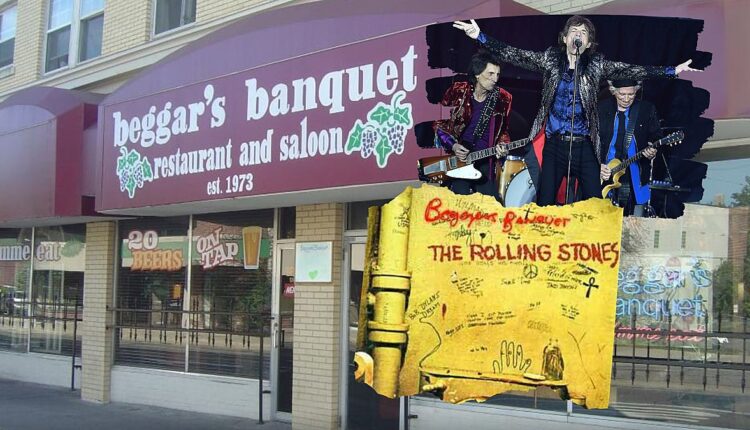 “Please Allow Me to Introduce…” you to a new spot in East Lansing you should visit, ESPECIALLY if you’re a fan of the Rolling Stones.

One of the most iconic records they ever put out, with “Sympathy for the Devil,” “Street Fighting Man,” and “Stray Cat Blues,” Beggars Banquet is not only an album, but apparently a restaurant in Michigan, too.

Beggar’s Banquet, the restaurant, has been serving the people of Lansing for more than 40 years, which is about 14 years after the restaurant’s namesake album was released.

Beggars Banquet, the album which was released on December 6, 1968, the 9th American album from the British Rock band, The Rolling Stones. It was a huge shift in the band’s sound, changing from their typical psych-pop sound to a more bluesy, “roots” rock format. Nonetheless, it still earned a No. 5 spot in the US and is certified platinum.

Perhaps its the bluesy shift that influenced Bob Adler so much, he named his restaurant in East Lansing after the record, “beggar’s banquet restaurant and saloon.”

The restaurant has featured menu items, but is more known for its rotating craft beers on tap, and big wine list. In fact, the vibe of the place is oddly something that Keith Richards might find appealing, and slip into before a show.

As we all know, Richards is known for popping up in random places while on tour to have a pint, and enjoy the local landscape.

And not just a place for rock stars, Bob once stated in a 2015 interview with the Lansing State Journal, he has no doubt some of the most significant political deals ever made happened at a table in Beggar’s Banquet.

“It wasn’t unusual on a Friday night to walk in and see the governor at the front table, the person he defeated over at another table, and even Congressman Bob Carr, and they’d all be in here. There were a tremendous one mix of faculty and staff and students, judges and attorneys, and legislators and lobbyists that hung out at Beggar’s.”

As for any other connections, or iconography related to the Rolling Stones in the restaurant, it seems that it ends with the name. But, you’re sure to find the “Salt of the Earth” kind of people pulled up to the bar any given day.

Ready to journey through the past (darkly)? Check out Rolling Stone’s Albums Ranked Worst to Best.