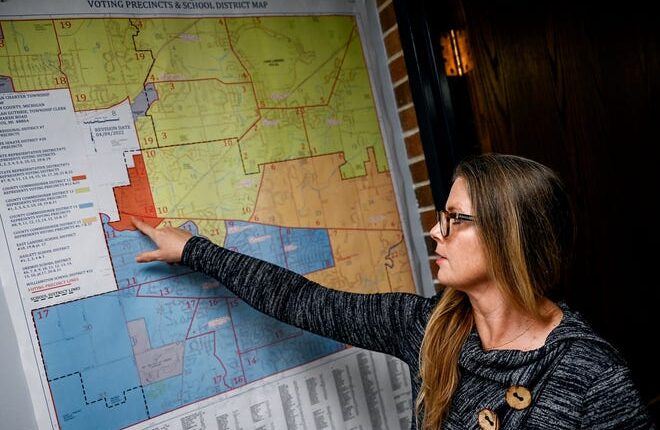 MERIDIAN TWP. – Business was brisk this week at the Meridian Township Clerk’s Office.

Staff hustled to process stacks of absentee voter applications – around 1,000 or so had arrived over the previous weekend. Residents were calling or stopping by asking questions.

“Today, I have 50 voicemail messages I have to go through,” Township Clerk Deborah Guthrie said Tuesday afternoon. “Each voter needs to have their issues addressed. It takes time.”

On the figurative eve of an election, that’s par for the course. But the 2022 primary is the first to follow the decennial redistricting and reapportionment process based on 2020 census data, and that’s adding to voter confusion.

Some voters are learning they are in a new congressional district, a new state Senate or House district or a new county commission district. And in many cases, they have a new polling place, too, for the Aug. 2 election.

“People were wondering why they are getting a new voter card,” Guthrie said. “All those (district) numbers have changed. People are calling and saying, ‘You sent me a voter ID card with the wrong information.’ And we’re explaining redistricting, that their state representative district is going to be different, that all of those (numbers) are going to be different. We have to explain that to each voter.”

Clerks were required to mail new voter identification cards if voting districts or polling places changed. But some voters might be caught by surprise if they mistook that mailing for junk mail and didn’t read it, Ingham County Clerk Barb Byrum noted.

“Every 10 years, districts change to reflect changes in population based on census data,” Byrum said. “This is not new, but for many voters, this might their first time realizing it.”

Byrum and other election officials said voters can find answers to just about all their questions on the Michigan Voter Information Center webpage. They can use that site to update their voting address, track their absentee ballot, find their polling location and review what’s on their ballot, among other things.

“The state has some really good voter information,” Eaton County Clerk Diana Bosworth said. “They’ve done a really good job this year in trying to answer all the questions, all the worries voters are having. I was quite impressed with it.”

They can also find updated maps and lists of polling locations on county or municipal websites.

Meridian Township officials changed voting precincts and polling locations because of redistricting and because schools had asked that polls be moved out of school buildings. Three new precincts were created as part of that process.

Delta Township Clerk Mary Clark said she kept 16 precincts but redrew the lines with an eye toward anticipated population growth and developments in the works.

She said she’ll have extra staff on hand to quickly redirect voters who show up at the wrong polling place.

“I just don’t know how frustrated voters are going to be,” she said. “I don’t want them to miss their chance to vote because of that. We want to get them pointed in the right direction as soon as possible.”

Here’s a quick primer on redistricting in Greater Lansing:

With the exception of a small part of western Eaton County, Greater Lansing (plus Livingston and Shiawassee counties) is now part of Michigan’s new 7th Congressional District. The tri-county area previously was split between three congressional districts.

US Rep. Elissa Slotkin, a Democrat who has served two terms representing the current 8th District, is running for the 7th District seat. She’ll be opposed in the general election by state Sen. Tom Barrett, a Charlotte Republican. Neither candidate has a contested primary race.

As of this election cycle, Lansing and East Lansing no longer share a state Senate seat. Lansing is combined with part of southern Ingham County and Eaton County in the new 21st district, while East Lansing is part of the new 28th District, which also includes most of Clinton and Shiawassee counties.

More:Redistricting is done. What will Greater Lansing’s future elections look like?

County commissioner districts in Clinton, Eaton and Ingham counties also were reconfigured to reflect population changes, with Ingham County adding one seat on the county board. Eaton and Clinton did not add seats.

The reapportionment plan of Ingham County commissioners approved last fall increased the number of districts from 14 to 15. The new District 15 includes Williamston and Williamstown, Leroy and Locke townships, along with parts of Meridian Township.

A district map can be found here. Other Ingham County election information, including candidates and ballot proposals, can be found on the clerk’s elections page.

More:Ingham redistricting creates new seat on Board of Commissioners

There are two county-wide millage proposals in Ingham County – one for juvenile justice and one for animal control – and a bevy of school and municipal ballot proposals.

A map and description of Eaton County Board of Commissioner districts, along with other voting information, can be found on the county’s election site. Eaton County has two county-wide millage proposals and four school or local government ballot questions.

There are about a dozen proposals on Clinton County primary ballots, including a county-wide tax limitation question. A list of candidates and proposals can be found on the county’s election page.

For the primary election, it’s too late to register to vote by mail or online or through Secretary of State offices. But anyone can still register to vote at their local clerk’s office until 8 pm on election day.

As with all open primaries, voters should remember they can vote in either the Democratic or Republican side of the ballot, but not in both, election officials said.

Any ballots with crossover votes will be spoiled, although votes in the non-partisan section still will be counted. Anyone who inadvertently votes in both the Democratic and Republican primaries should ask their local clerk to spoil the ballot and get a new one, officials said.

“Typically, for August primaries, we saw an increase in spoiled ballots because people vote in one part and then in the other section,” Byrum said.

“We really stress (that voters read) the instructions when they are getting a ballot,” Bosworth said.

A big source of confusion involves absentee voter applications, Guthrie said. Voters need to fill out an application and mail it in before they can receive a ballot, she said.

“Voters think that if they are on permanently absentee voter list they will (automatically) get a ballot,” Guthrie said. “They won’t get a ballot if they don’t fill out an application.”