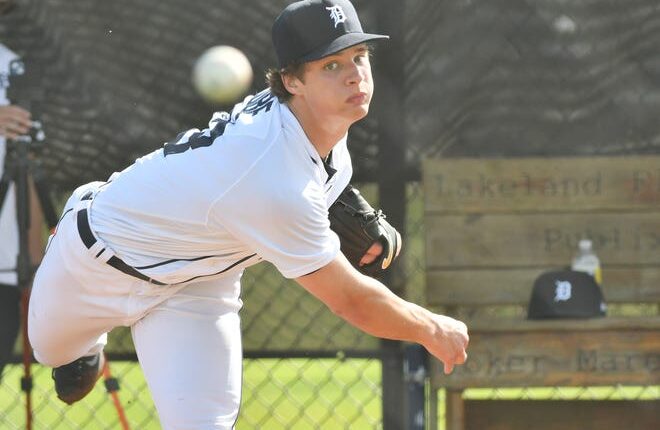 The Detroit Tigers steadily had been climbing the ladder when it came to Baseball America’s farm system rankings.

The Tigers checked in at 30th as recently as 2015 and, thanks in part to lousy seasons at the major-league level producing high draft picks, climbed to as high as No. 5 in 2021.

That ranking dropped, significantly, on Thursday.

Baseball America revealed its midseason organizational rankings, slotting the Tigers at No. 27, a drop of 21 spots from their no. 6 preseason ranking.

A couple of factors were at play there, namely Riley Greene and Spencer Torkelson. Both were top-five prospects entering the season, and both have since graduated to the majors, losing prospect eligibility. Torkelson since has been returned to Triple-A Toledo after struggling in Detroit, while Greene briefly spent time as the game’s No. 1-ranked prospect while manning center field for the Tigers.

“The Tigers have seen Riley Greene live up to expectations in the majors, while Spencer Torkelson struggled,” Baseball America writes. “The Tigers’ 2022 draft is promising, and players like Reese Olson, Garrett Hill and Kerry Carpenter have provided bright spots. But the system as a whole has consistently struggled to produce hitters who become MLB regulars.”

The Tigers have three prospects in Baseball America’s top 100, led by 2021 first-round pick (No. 3 overall) Jackson Jobe. Right-hander Wilmer Flores (90), and infielder and 2022 first-round pick Jace Jung (94) also are on the list.

Local Health Officials to Feds: Where’s the Rest of Our Monkeypox Vaccine?