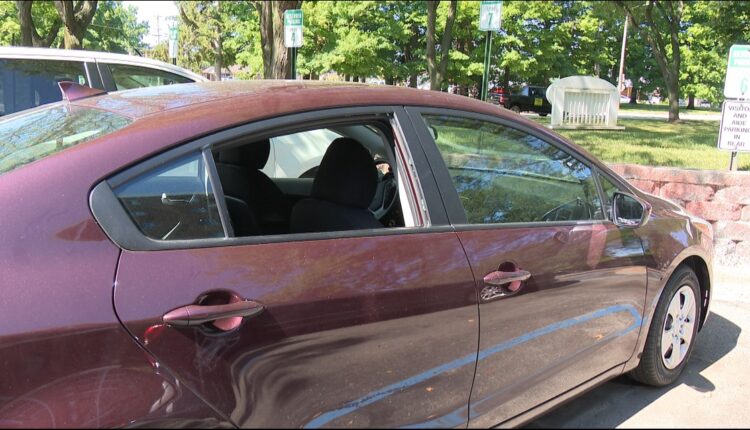 At least two Kia Fortes parked outside of a senior living complex were targeted by vandals overnight.

GRAND RAPIDS, Mich. — The rash of recent Kia and Hyundai thefts on the west side gained several new victims Thursday.

The saga continued overnight at a senior living complex in Grand Rapids.

Nothing was stolen, but multiple Kia vehicles were vandalized.

“I enjoy my independence.”

“I was just getting up,” she explained, when she got a call from her friend, Terry Gardner. “He says ‘your car was vandalized along with two other ones.’”

They found glass on the ground after thieves shattered the Forte’s rear passenger-side window at some point overnight.

They also removed a panel from the car’s dash, Wall believes, trying to hot-wire and drive off with her ride.

Wall admitted she was well-aware of the trend: scores of Kia and Hyundai vehicles targeted in a wave of recent thefts.

Both victims have units at a complex on Grand Rapids’ west side that houses seniors.

“It’s a vulnerable population for the most part,” Gardner said. “Security is an important thing here.”

Gardner pointed out a second Kia parked out back that had been vandalized overnight. He said it marked the second time in a row vandals had targeted that vehicle.

The owner had just gotten the car back from the shop after another attempt to steal it, Gardner explained.

“We’ve seen multiple cases of catalytic converters getting cut out of cars this year,” he noted. “Something really needs to be done to make this a little safer place.”

Grand Rapids Police Department records showed officers had responded to several acts of vandalism at the complex off Bridge and at least one car theft since May.

The department declined to provide information regarding an active investigation.

13 ON YOUR SIDE’s calls to the complex’s management firm went unanswered Thursday.

“It makes me feel bad,” Wall said. “Nobody’s doing anything about it… it’s not the police’s fault. I wish there was something else they could do about it.”

Wall was in the process of figuring out how to get her car fixed Thursday afternoon. She hopes something will bring the crime spree to an end.

13 On Your Side asked Wall if there’s anything she’d say to the folks who are out there stealing cars. Here’s how she responded:

“This is bothering senior citizens who have a car payment, and they want a nice car, which I do,” Wall said. “Their parents should do something about it. What are those kids doing at three o’clock in the morning?”