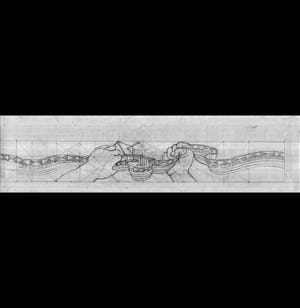 Detroit’s eastside is full of stories of Black legacy households, the struggle to rebuild the community, block by block, and the rich history of industry, Motown and African American pioneers.

These were among the characteristics described earlier this summer at a community meeting to provide inspiration to Detroit artist Hubert Massey as he designs and paints a mural on the exterior wall of Stellantis NV’s new Jeep plant, part of the automaker’s $35 million community benefits agreement with the city ​​and residents.

Massey on Thursday unveiled a sketch of the design for the south sound barrier during a virtual public meeting.

The artwork will be on the wall outside the $1.6 billion Mack Assembly Plant, where Grand Cherokee SUVs are built. The mural will be along two sections of Beniteau Street near Southeastern High School and Kercheval Avenue. It’s expected to be 15 feet high and 1,500 feet long, making it one of the largest murals in the region. Massey’s design shown Thursday is half of the sound barrier.

The pencil-on-paper design depicts five themes, all connected by a patterned ribbon meant to represent the community’s various culture: the historic migration to Detroit, the ability to walk to work to places like the auto plant, strength, diversity and a look toward a bright future.

To show migration, Massey has a black man with a suitcase in front of a train, plane and bus. For walkability, two pairs of feet appear in front of a row of homes and an industrial plant.

“There will also be lady’s shoes up in there, too, because working women and men also went to work at the factory at Chrysler,” Massey said. “They walked from their homes, because Chrysler was built right in the neighborhood for people to be able to walk to work.”

Strength is displayed as two hands grabbing onto the ribbon in front of a home with a similar appearance to the houses in the neighborhood, many of which are roughly 100 years old. The home is meant to represent the house of physician Ossian Sweet off Garland Street, several blocks from the Detroit Assembly Complex. In 1925, a mob of White residents gathered there to protest integration of the neighborhood. Someone in the house fired at the group, killing one man and wounding another, resulting in the arrest of Sweet and others in the house. Following a mistrial, the court upheld the right of Sweet and his companions to protect life and property under threat.

“He was protecting his home, his family and all, because at one time, people didn’t want African Americans to live in the community at all,” Massey said. “I thought that was fitting to have that up in here, because it shows the resilience of this community. It shows the strength of this community.”

A group of four people representative of different ethnicities and races, including African American, Native American, Hispanic and Italian represent diversity. An umbrella in the background symbolizes community gatherings held by local organizations.

Residents emphasized the need for representation in the mural of the majority-Black residents: “If there was something in there that had a Black couple, Black family that depicts what really has been taking place, or what has been the backbone of this community for the last 40 or 50 years,” said Darnell Gardner, who’s family has lived in a home along Beniteau lining the plant since 1950, “that would be my observation.”

Massey was accommodating: “A family can be there, that’s not a problem. That represents the community. Like I said, in the banner, the culture could be diversified in that. The faces could be of African American descent who predominate the community. That could work like that.”

Massey draws a woman backed by a man holding a small family in her palm highlighted by rays to represent the future. The same woman also appears in a large piece at the College for Creative Studies.

A resident identified as Junior Williams suggested a greater emphasis on partnership between both sexes for a brighter tomorrow.

“We need to continue with the fact that we have Black families,” Williams said, “men and women, supporting families throughout this entire community.”

Massey agreed: “That makes a lot of sense, and actually, he should be equal the size of her, so they show their unity like that. I think that will work really well.”

The barrier is being primed for the paint. Massey next week will get the images ready to be applied to the wall, where they can be outlined and painted.

Massey, a native of Flint, is a fresco artist who learned the technique from former assistants of Diego Rivera, the artist for the Detroit Industry Murals found at the Detroit Institute of Arts.

Massey’s work can be found throughout the city and state of Michigan.