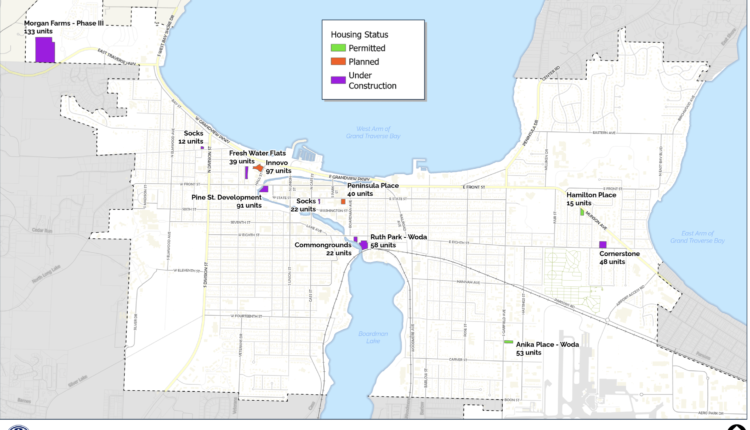 Amid continued discussions about the region’s housing crisis, Traverse City Planning Director Shawn Winter shared a piece of good news with city commissioners Monday: 632 housing units across 16 developments are now in the pipeline within city limits, a figure that represents a 10 percent increase in the city’s overall housing stock.

But those units – which represent a combination of planned, permitted, and under-construction projects (pictured, map) – are primarily concentrated in large-scale multi-family developments. With the other major growth category consisting of single-family homes (not included in the 632 units), Winter said there is a lack of diversity in the city’s housing supply – including a noticeable shortage of duplexes, triplexes, fourplexes, townhouses, live- work units, bungalows, and courtyard apartments.

“What we are still lacking is true missing middle housing options,” Winter wrote in a housing report that he presented to commissioners Monday. “To clarify, missing middle refers to a type of housing, not a specific cost or income bracket.” Winter said that while it was a positive development that 632 units have queued up since 2020 – “a significant gain for any community” – some of those projects are in commercial zones where some or all of the building units can be used as short-term rentals, as with the 40-unit Peninsula Place project planned on 326 East State Street.

Others have city tax breaks in place – as with Ruth Park at 520 Wellington Street and Anika Place at 947 South Garfield Avenue – that will help guarantee affordable rental rates for at least 16 years (developers have said those rates will be extended long beyond that) . But large-scale apartment and condo developments “carry a lot of risk,” Winter said – making them more likely to be delayed or put on hold during periods of high inflation or economic turbulence – and “take a lot of time” to complete, typically several years from announcement to occupancy. And while “we’re getting a lot of single-family housing, we’re getting big developments,” Winter said, he also noted that “the housing demand needs to be addressed by providing multiple options to meet the needs of people where they are in life.”

City commissioners discussed options Monday for increasing housing diversity in the city. “The biggest barrier to providing housing flexibility remains our zoning regulations,” Winter said. He suggested a “suite” of zoning changes city commissioners could consider to make it easier to build duplexes, triplexes, and other types of missing middle housing. With 5,600 residentially zoned lots in the city, if even a “fraction” were granted more zoning flexibility to build more density, “it could help move the needle,” Winter said.

City Commissioner Tim Werner said that rather than expecting staff or city planning commissioners to initiate those zoning changes, city commissioners could direct the planning commission to take up the ordinance rewrites – extending “political cover” to that board and making it clear city commissioners were open to the changes to avoid wasting staff and planning commission time. While Mayor Richard Lewis questioned whether any zoning changes should wait until the city finishes its master plan rewrite – now underway – Winter pointed out that housing will likely remain just as urgent a priority under the new master plan as it is under the current one. “We can start moving on (zoning changes) now because these things take time,” he said. “We could be years from making any kind of noticeable impact on housing if we choose to wait on it. I think this is something we can address now.”

City Manager Marty Colburn also noted the city is still pursuing multiple potential housing projects on city-owned property. A proposed HomeStretch development in Lot O at the northwest corner of Cass and State streets is expected to return before city commissioners this fall for further action. Commissioners also recently agreed to sell a 35-acre city-owned property located within Garfield Township at 1383 Cass Road and explore using the funds for housing development. Bids on the property are due October 20. Colburn said the city has also had talks with the Traverse City Housing Commission about using a portion of a 14-acre city parcel next to Oakwood Cemetery for a housing development. Under the city charter, using the property for housing would first require a public vote. City commissioners are also expected to revisit discussions about developing housing on three city-owned parcels on Beitner Street and Woodmere Avenue at their October 17 meeting.

During a separate discussion Monday about city commission goals and action items for the coming months, housing again emerged as a top priority. Commissioners will soon weigh in by poll to identify 3-5 tasks they most want staff to focus on in the near future. Initial suggestions that appeared popular among board members Monday included establishing an ad hoc committee to explore amending the city’s charter through a ballot proposal to create an inclusive housing millage and fund, exploring housing-related incentives that could be extended to homeowners or developers, and hosting an upcoming study session with a panel of experts to identify tools and opportunities the city can use to increase and diversify housing.

Colburn said it was also important to consider “when is enough” when setting realistic parameters around city goals for housing, adding that bringing 600-plus more units online was already a significant achievement. Lewis agreed that the city is “never going to fix” the housing shortage single-handedly since it’s a regional and not just a city issue, particularly since the city has legal barriers to building taller developments that could otherwise offer more residential density. Lewis said city leaders can continue to explore all options to encourage housing, but are ultimately only one part of the puzzle. “This community is bigger than the city,” he said. “We can work toward (alleviating the housing crisis), but we’re never going to fix it.”