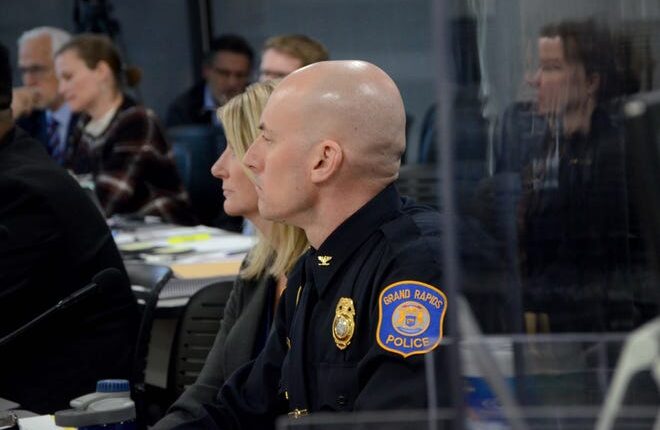 Grand Rapids — Deadly force “is always the last resort” and that philosophy, as well as de-escalation training, needs to be ingrained into the department’s policies, Grand Rapids Police Chief Eric Winstrom told The Detroit News Tuesday.

Winstrom made the comments after meeting with City Commissioners and the head of a department created to establish better ties between his officers and the city’s residents. The purpose of the meeting was to broach the elephant in the room: How to move forward in a city that made national news in April with another shooting of a Black man by a White officer.

Patrick Lyoya, 26, was shot in the back of the head by officer Christopher Schurr on April 4 following a tussle on the ground after a traffic stop. The investigation is ongoing amid pressure from national civil rights groups and activists like the Rev. Al Sharpton have intensified.

While not getting into specifics about the investigation into the shooting, Winstrom, a former Chicago cop who started as chief in Grand Rapids in March, told The News of deadly force: “It has to be an absolute last resort.”

“And that includes de-escalation,” he added. “When I was a brand new police officer in the year 2000, your job was to get the handcuffs on a person as fast as possible. Well in 2022, that’s changed, policing has changed significantly in two decades.”

He said that includes “deescalating the individual you’re talking to or deescalating yourself as a police officer — using a time tactic, seeing it in a different way instead of, ‘I gotta get these handcuffs on as soon as possible.’”

Winstrom acknowledged many community members don’t trust the police and that the issue is a long-standing problem. He’s heard that refrain when he’s met with community groups.

“From what I’m hearing from the community, a real vocal part of the community is there’s no rebuilding trust. You’ve got to build it because it was never there,” he said.

Some of the commissioners made the point there is a trust problem as they discussed how to be more receptive to complaints from residents as well as recruiting diverse officers to a police force that is predominantly White.

Brendan Davis, the director of the city’s Office of Oversight and Public Accountability, said the problems won’t be fixed overnight because they’ve been brewing for decades.

“We’ve been fighting to get to a place where there aren’t disparities. Racism is everywhere. It’s in every system throughout our country and police are no exception,” Davis told The News. “We need a police department that is willing to make changes. The truth of the matter is there has to be change. There has to be change now.”

“I’m excited about Chief Winstrom being here. The top cop, he said, is “willing to implement changes.”

“He’s been open to civilian oversight of law enforcement which is not something that all police officers are open to,” Davis added.

Racial disparities in traffic stops, Davis said, have been a problem in the state’s second-largest city for a long time and was the subject of a study done several years ago that showed the bias against minority motorists.

The commissioners, he said, are willing to beef up his budget “in order for us to do the work” to engage residents better and hold bad officers accountable.

Winstrom said he hasn’t heard arguments to defund the police.

“Especially after the incident, I thought that I would go to these community groups and there would be a lot of, ‘we don’t want the police.’ Not at all,” he said. “Every group that I go to…we want good policing, we want better policing, we want just policing.”

In May 2019, the Michigan Department of Civil Rights announced an investigation into 28 individual complaints against the Grand Rapids Police Department.

“Those complaints are also included in a broader investigation into systemic bias in the policies and procedures of the GRPD,” a 2020 state press release said.

The investigation is ongoing. Grand Rapids US Attorney Andrew Birge confirmed to The News last month that the state civil rights department had requested another “pattern or practice investigation” into GRPD policies and practices.