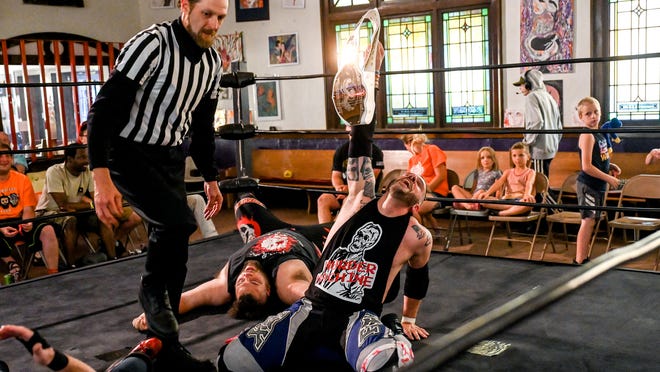 “I get to take all my passions, all my interests and hobbies and put them together into one thing,” he said.

Macomber said he has always loved wrestling and remembers at a young age wanting to run a professional wrestling production company. As a kid, he’d watch tons of matches with his dad and put on wrestling events using his action figure toys.

As an adult, he started training as a wrestler a year before getting in the ring professionally for the first time in 2008. He continued wrestling and in 2019 he and Ranta formed the company and began putting on events in Lansing featuring wrestlers from across Michigan.

Macomber says the monthly wrestling events at The Fledge are affordable and kid-friendly.

“It’s a mixture of athletics and showmanship and I think that’s what a lot of people enjoy about it,” he said. “Aside from the wrestling, there’s a story. There’s interaction with the crowd. We’ve got regulars that come every month and they get involved.”

After some time off due to COVID-19 restrictions, he says the monthly events are back on a regular schedule. Macomber says he and the wrestlers strive to put on a quality show and that their dedication to the craft shines through.

Capital Pro Wrestling’s next event is at 3 pm July 16 at The Fledge in Lansing.