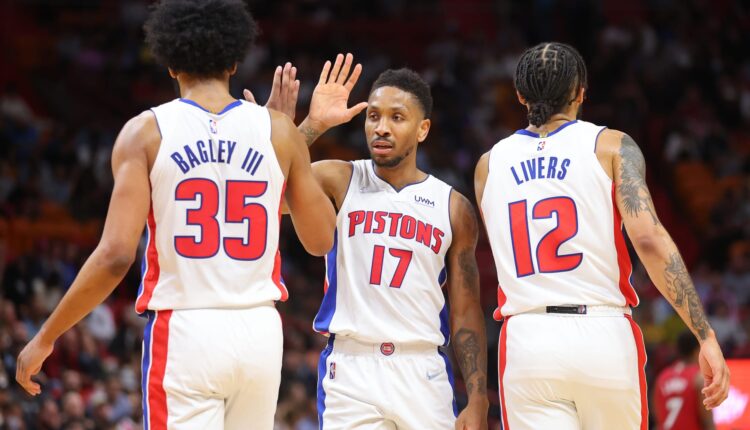 The Detroit Pistons will go into the next season with one of the best young cores in the entire NBA with Cade Cunningham, Jaden Ivey, Saddiq Bey, Isaiah Stewart and Jalen Duren.

Troy Weaver has received high marks for the Jerami Grant trade that ended up netting the Pistons nice return after the dust from the draft had settled.

But the Pistons aren’t finished yet, as they still have enough cap space to add another big-name guy, or spread it around and try to fill our their roster with upgrades of veteran depth.

We took a look at the Pistons depth chart after the draft and prior to free agency and one position stood out as a potential weakness, and that is power forward.

Jerami Grant left a space that needs to be filled, as the Pistons don’t currently have a true power forward on the roster.

Here are some of their options.

The Pistons don’t currently have a power forward on the roster, but they do have some potential internal options.

If the Pistons re-sign Marvin Bagley III, he could fill that starting role alongside either Isaiah Stewart or Jalen Duren at center. MBIII played well for the Pistons and has a skillset that their other bigs lack.

But he is more-or-less a center masquerading as a power forward, as he is not a good long-range shooter and isn’t adept at defending the perimeter. The Pistons would rather have him near the rim, where he is very efficient and has a bag of offensive moves.

The other option would be to move Isaiah Stewart to power forward and start him alongside Jalen Duren, keeping Bagley III coming off the bench as an offensive weapon (if they keep him).

Stewart has shown he can defend the perimeter and was one of the best young bigs in the NBA at it last season, but the real question is if he has the offense to succeed there.

Stewart is reportedly working on his 3-point shooting this offseason and he put up some promising numbers at the end of this one, but I still think it’s a stretch that he is going to provide the type of shooting and spacing the Pistons need out of that spot.

Detroit could also use Saddiq Bey in that spot, as he has the size and strength to guard fours, and that might be his best position given his lack of quickness. But then their positional need turns to the wing, so that option isn’t ideal either.

Depending on how they view Isaiah Livers, the Pistons could move him into a more prominent role and go with a smaller, more versatile lineup that had both him and Bey, which would give Detroit a decent amount of shooting around Cunningham and Ivey.

The point is that the Pistons have options and they don’t have to land a splashy name in free agency. But that doesn’t mean they won’t.

It’s more likely that the Pistons will look for external help at forward even if they do retain Marvin Bagley III.

There are some intriguing options on the free-agent market, including players like Miles Bridges, Taurean Prince, TJ Warren and Otto Porter Jr. among others.

Having the flexibility to move Bey to the four will allow the Pistons to just go after the best forward, as it doesn’t have to be a guy who can bang in the post or guard the other teams power forward.

However, if they do retain Bagley III, the options will be more limited and they may have to settle for someone in the mid-tier rather than a guy like Bridges.

There are still plenty of offseason moves to come and it’s going to be interesting to see how the Detroit Pistons fill our roster particularly the forward position.