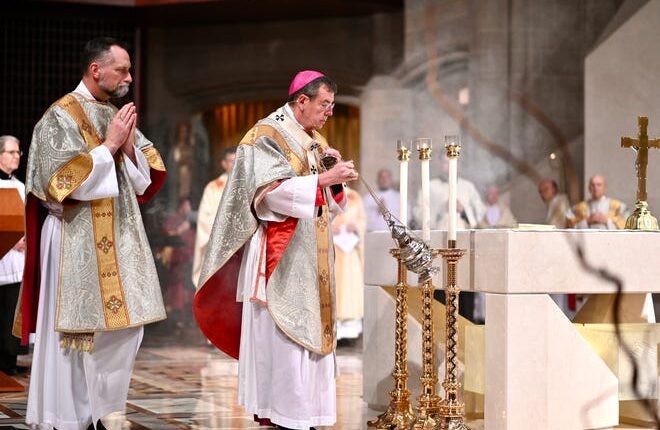 Following the US Supreme Court overturning Roe v. Wade this week, some churches are preparing for potential protests and disruptions during services on Sunday.

In an email newsletter to parishioners at St. Joan of Arc in Saint Clair Shores, Monsignor G. Michael Bugarin wrote that the Supreme Court decision in Dobbs v. Jackson Women’s Health Organization, which overturned Roe v. Wade, as Archbishop Allen Vigneron said, “a cause for praise and thanks to God.”

“But it certainly doesn’t mean our work is done,” Bugarin wrote. “We have so much more to do in the pursuit of promoting a true culture of life from the moment of conception to the moment of natural death.”

In the message Bugarin shared his thoughts in the event his church has protest or disruption during Mass. He notes that two weeks ago two parishes had disruptions, the closest being St. Veronica Parish in Eastpointe. According to a report by the Catholic News Agency, during a mass at the church June 12, a nearly naked woman stood on a pew and shouted pro-abortion chants. A screenshot of a TikTok video shows a woman, whose body is censored, standing on a pew with outstretched arms.

Bugarin said that should a disruption occur at St Joan of Arc, parishioners are not to engage or try to assist in the situation.

“It is important to know that we have a full security plan in place and a designated individual at each mass who will be responsible for calling (Saint Clair Shores) Police and for leading the task of handling the disruption,” he wrote. “If a disruption occurs and depending on what part of mass it occurs, the celebrant will lead the congregation in reciting decades of the Rosary until law enforcement has arrived.”

In his letter, Bugarin included a message from Vigneron reaffirming the church’s response to the Supreme Court’s decision in the Dobbs case.

“I join my brother bishops in Michigan in affirming that the Church must redouble her efforts to ensure every woman, child, and family has the support necessary to thrive in pregnancy, early childhood, and beyond,” Vigneron wrote.

Vigneron said the Archdiocese of Detroit has partnered with Catholic Charities of Southeast Michigan to launch Walking With Moms in Need, a program that equips Catholic parishes and parishioners to help pregnant and parenting mothers.

“We seek to address and resolve the struggles women and families face, rather than contributing to the ‘throwaway culture’ that proposes eliminating people as an acceptable solution,” he wrote. “As we renew and redouble our efforts, let us continue to pray unceasingly for all pregnant women and their children, that they know the love of Christ as shared through the witness borne by you, me, and all Catholics.”