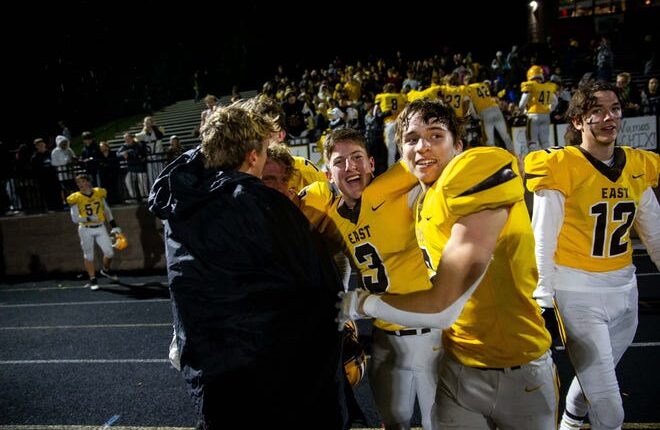 ZEELAND – After Austin Keur was sacked with less than a minute to go, the Zeeland East football team trailed and the clock was ticking.

Keur calmly got back up, took the next snap and threw the ball down the near sideline to teammate Ethan Rosenberg.

Rosenberg went up over the Grand Rapids Union defender and caught the pass on the defender’s helmet, hung on, and ran the remaining 10 yards into the end zone with 42 seconds remaining in a homecoming win.

“I don’t really know how I came down with it. Austin gave me a great pass and a chance to go up and get it,” Rosenberg said. “I love that we were able to get a win for the seniors in their last home game. That catch and score for the game-winning touchdown is something that every little kid dreams of. That is what I dreamed of watching these games. It was so awesome to see it happen.”

“This means the world to us. We have put in so much work and nobody notices. We just played as one and played for each other,” Berghorst said. “This is something we will never forget.”

It was a thrilling first win on the field for the Chix this season. They came into the game 1-6 with the lone win being a forfeit by Holland.

“In a season like this, this is one of those games that make you remember why you play football,” Zeeland East coach Joe Woodruff said. “We’ve been on the short end to some really good teams.”

Subscribe:Get the most coverage of local sports with this special offer

There were four lead changes in the back and forth second half.

When Union took the lead and then forced a Zeeland East punt, Ryder Reimink intercepted a Union pass and the Chix had 3:36 to go.

Zeeland East marched down the field with runs from Keur and Tyler Loeb and a pass to Teagan Slenk that got the Chix across midfield as the rain and wind picked up.

Keur found Rosenberg again with 42 seconds to go and he grabbed the ball off of the defender’s helmet and hung on.

“He gets up over the top of the kid and that is one of those memories,” Woodruff said.

The back and forth

Union took a 7-0 lead on a 1-yard run by Elijah Taylor early in the second quarter.

The Chix responded with a 2-yard touchdown run by Tyler Loeb. The kick attempt was blocked and Zeeland East trailed 7-6 with 6:08 to go in the half.

On fourth-and-5, Austin Keur threw a 38-yard touchdown pass to Noah DeWitt with 1:12 to go in the second quarter. The conversion failed and the Chix led 12-7.

In the third quarter, Tommy Stevens scored on a 10-yard run to return the lead to the Redhawks, 15-12, after he alsoran in the two-point conversion.

The Redhawks scored on a 2-yard run by Najeh Thornton with 10:26 to go in the fourth.

Evan Berghorst has watched both of his brothers have a number of signature plays over the years at Zeeland Stadium.

Johnathan and Adam were both all-state players who went on to play at the NCAA Division I level.

He recovered a fumble on the first possession for Union.

The fumble came after Union converted a third-and-22.

Making it even more special was seeing his father, Chuck Berghorst, up in the stands for it, as well as his big brothers.

Earlier during the pandemic, Chuck contracted COVID-19 and was in bad shape, on a ventilator and the prognosis was not good. But he was able to battle through it and make a full recovery after several months trying for the family.

Evan also had a huge sack late in the third quarter.

“It means the world knowing that my dad was here. He could not have been here. It is my brother’s birthday too (Johnathan) and to be able to play like this in front of my entire family,” Evan said. “My brothers have been my biggest role models. They always told me how much they looked forward to me playing out there and see what I could do.”