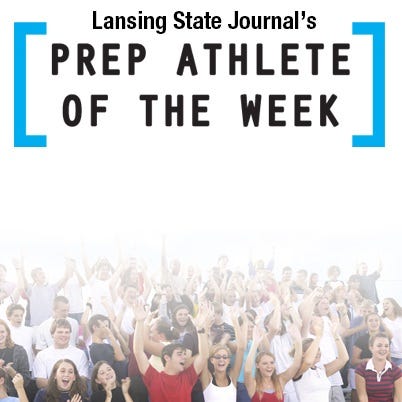 Here is a look at the latest individuals in the running to be voted the Lansing State Journal high school athlete of the week winner.

Voting is unlimited and open until noon Wednesday to determine the winner, who will be featured in the LSJ.

The senior was the champion at the Corunna Earlybird Invitational on Aug. 30 and helped the Redwings claim the team title. Bowman had a personal-best time of 15:37.49 while finishing as the champion by more than 30 seconds in the large school division. He Helped St. Johns finish seven points ahead of Okemos for the team title.

The junior captain played a part in a big second half while helping the Rams end a losing streak with a 6-1 win over Traverse City Central. Holt trailed 1-0 at the half before breaking through in the second half with DeMond delivering a hat trick.

The senior had five catches for 140 yards and two touchdowns in the Panthers’ 39-34 win over Portland. His 22-yard touchdown reception in the closing seconds was the game winner. Kurncz also passed for 59 yards and a touchdown, rushed for 55 yards and had an interception.

Schaibly tied for medalist honors while helping the Bees win the Laingsburg jamboree Aug. 30. Schaibly shot a 46 to lead Bath, which had a team score of 206.

Thelen tied the school record for touchdowns in a game while helping the Pirates improve to 2-0 with a Friday victory over Mount Pleasant Sacred Heart. He had 26 carries for 301 yards and four touchdowns, completed 7 of 10 passes for 165 yards and two scores and added a 30-yard reception for a touchdown.

Know of a worthy LSJ high school athlete of the week winner? Send nominations to [email protected]m by Sunday evening each week.