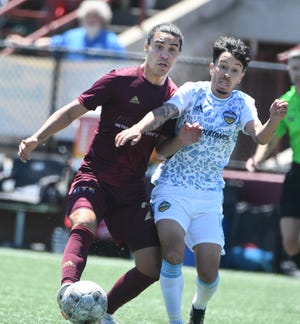 That is, with the exception of a three-minute stretch in the second half when Tulsa FC scored twice to stun a crowd of 6,541 and force DCFC to settle for a 2-2 draw with Michael Bryant’s late equalizer off a corner kick.

“Disappointing, again,” DCFC head coach Trevor James said. “For us to give up two goals in a game is always a little bit of a surprise … but we just fell asleep for a few minutes and paid the price for it. … If you fall asleep against good players, they can punish you, which they did tonight.”

The draw kept DCFC (51 points) in sixth place of the Eastern Conference table. Pittsburgh (53), meanwhile, allowed an equalizer from Orange County in the 90th minute Saturday night to open the door for Le Rouge to make another jump, but DCFC gave up the first goal to Tulsa just minutes later in real time.

DCFC must reach fourth place or higher to host a playoff game. It currently trails Tampa Bay and Birmingham, who are in third and fourth place, respectively, and each have 55 points, for one of those spots.

Yazeed Matthews gave DCFC a 1-0 lead after a flawless first half, scoring in 47th minute to take a lead that felt permanent after Le Rouge (13-12-6) entered the locker room with a 6-0 advantage in shots.

But Tulsa caught DCFC sleeping on its home pitch and quickly struck twice in the 67th and 69th minute to gain a 2-1 lead in the blink of an eye. Dario Suarez received a through ball at the top of the box, moved it to his left foot, and fired a ball down and to goalkeeper Nate SteinWasher’s left for the tying goal.

Then, just two minutes later, Eric Bird settled down a lob to the box from Rodrigo Da Costa and fired the ball home with his right foot to silence the Detroit City faithful.

“It may have been a little bit of the fact that you get a little bit of relief once you score. If you have so much play and then you don’t score, when you finally do get the breakthrough, there’s a sort of mental lapse, if you like, to think like … we’ve got the goal now,” James said.

Just when it looked like DCFC was down for the count, a massive counter got Le Rouge back in the fight. Hoppenot played a ball to the spot off a corner kick for Bryant, who put home his fourth goal of the season and first since May 15. The assist gave Hoppenot his team-leading 10th of the season.

Bryant, DCFC’s multi-purpose weapon who started at center back this night, was DCFC’s highest-rated player (8.2) in the match, per FotMob.com. In addition to the goal, Bryant completed 54 of 57 passes and was 9-for-11 connecting on long balls with five interceptions and six recoveries.

“As I’ve said before, it doesn’t seem to faze him in which position you play him. He’s a very good footballer … and he can play in any position on the field, and he’s better than most in most positions on the field,” James said.

“I couldn’t be happier for Michael to score a great goal and obviously we needed it. But he’s been outstanding this season.”

DCFC looked much more potent offensively off the bat than it has in most home games this season. Rhys Williams sent a cross to Richard Foster that resulted in a shot over the net; Williams was stopped cold on a wide-open chance just feet from the goalmouth; Foster sent a long through ball for Matthews that was put in with a header, but called back for being offsides.

Though DCFC ended the first half with a 6-0 advantage in shots, just one of them — Williams’ point-blank chance — landed on goal.

“There’s no stress or pressure. Everyone remains calm,” Matthews said of the halftime mood. “So the message in the locker room will always just be positive. Forget about what happened in the first half. If it was bad, move on, like we did second half.”

Matthews got DCFC on the board in the 47th minute. He finished a ball that found its way to the front of the net for an easy tap-in that gave Le Rouge a 1-0 lead to start the second half. Matthews is one of the longer-tenured players on the club but was unable to join DCFC earlier in the season because of green card issues. He made his season debut on Aug. 18.

“It’s tough — every day, working out, knowing that you’re not playing on the weekend,” Matthews said.