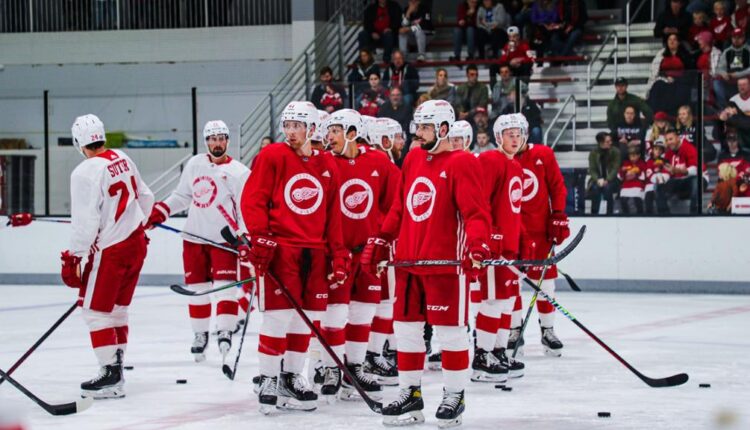 TRAVERSE CITY, Mich. — If the purpose of the first two days of training camp were to get the Detroit Red Wings back into the groove of practice, day three was focused on dialing it up a notch.

As camp continues, first-year NHL head coach Derek Lalonde said he’s impressed with how his players are responding to upticks in intensity.

“We saw how physical things were,” Lalonde said. “That’s by design. We even ramped things up in the first half of practice again today. The guys responded very well.”

Camp performance is important to Lalonde because it helps him determine who deserves a place in Detroit.

“You want the level of guys earning it,” Lalonde said. “You certainly want it to play out that way.”

Forward Lucas Raymond knows what it’s like to compete for a 23-man roster spot after spending last year’s camp trying to prove he belonged in the NHL.

And Raymond did just that in the 2021-22 campaign, finishing third among rookies in points (57), fourth in assists (34), tied for second in goals (23) and was one of only three first-year skaters to play in all 82 games.

Now, the 20-year-old Raymond is keen on building off his eye-opening rookie campaign.

“I think the most pressure I have is probably on myself, trying to get better,” Raymond said. “I’m trying to focus on that as much as possible and block the other things out. Just playing good hockey will lead to a lot of good things.”

Tweet from @daniellabruce_: Lucas Raymond talked today about helping Simon Edvinsson. Both were high draft picks and Raymond said the most important thing for Edvinsson is to “play his game.” Adds that Edvinsson has looked really good through camp. #LGRW

Forward Philip Zadinawho signed a three-year contract with Detroit on Aug. 26, also enters the upcoming season with something to prove.

“During the offseason, I was trying to get more powerful, more dynamic,” Zadina said. “Obviously get stronger and on the ice, just overall, just be a better player by improving my shot and skating.”

The 22-year-old Zadina, who recorded a career-high 24 points (10-14-24) in 74 games with the Red Wings last season, hopes the changes in the club’s style and system improve his overall game.

“It’s a fresh opportunity for everybody on this team,” Zadina said. “Especially for myself. I’m excited about this chance everybody is getting and hopefully, we’ll take it from the right end to use the chance to become better players, a better team.”

New goalie Ville Hussowho inked a three-year deal with Detroit after being acquired via trade from the St. Louis Blues on July 8, is also excited for the 2022-23 campaign.

“I think it’s a good situation for me and Ned to battle for the spot,” Husso said about sharing the crease with fellow netminder Alex Nedeljkovic. “Whoever wins more games, I bet he’ll play.”