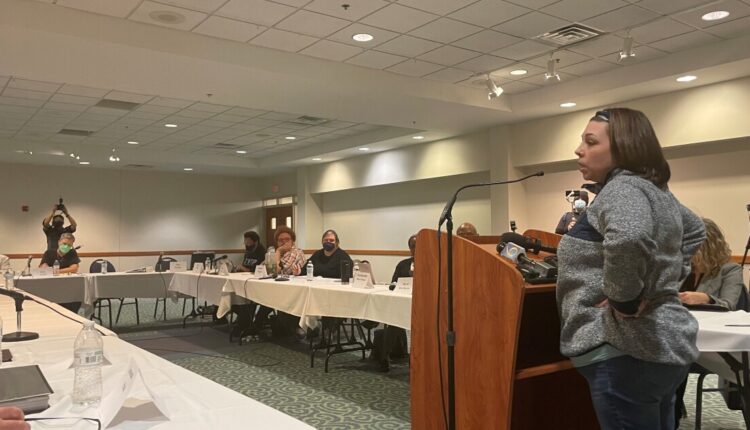 Calls in East Lansing demanding justice for a Black man shot and arrested by city police officers in a Meijer parking lot in April are continuing.

Community members plan to speak out at two city meetings this week.

DeAnthony VanAtten, who is Black, sustained two gunshot wounds after 911 calls on April 25 alleged a man had run into the building with a gun.

Michigan Attorney General Dana Nessel has since exonerated the two officers who shot VanAtten, while VanAtten has been charged with seven felonies and one misdemeanor.

East Lansing community members are planning to voice their frustration with Nessel’s decision during a city council meeting on Tuesday.

Karen Hoene said as an individual and a member of the city’s Human Rights Commission, she’s not satisfied with the results of Nessel’s investigation. She wants to remind city councilmembers the community still cares and sees the charges against VanAtten as an injustice.

“He didn’t have his gun out. He was not threatening with anybody his gun,” Hoene said, “It’s a concealed carry state, and I understand that he might not have had the proper authority to have that gun, but the person that called [911] didn’t know that, and the police didn’t know that.”

Hoene says she’s not sure there’s anything that can be done on the local level that could trump the state’s decision, but, ideally, she’d like to see Nessel review the case again.

“I am very concerned about eight charges against this young 20-year-old and what it’s going to do to his life because he made some poor choices, and so I just want the community to remember that this is our city, and nothing ever changes unless we speak up,” she said.

The City Council will meet Tuesday evening at 7 pm at the Hannah Community Center. On Wednesday, the city’s Independent Police Oversight Commission is expected to include the case on their agenda.

Erick Williams, a member of the oversight commission, criticized Nessel’s decision in a letter sent to Attorney General following her announcement of the conclusion of the investigation on Aug. 24. He says he has yet to receive a response from Nessel or her office.

“We thought that they were going to do an investigation and give us the results of the investigation, but they’re not,” he said, “All we got was a press release.”

In his letter sent outside his role as a member of the oversight commission, Williams accused Nessel of protecting the two East Lansing police officers who shot VanAtten by withholding evidence. He also denounced the charges against VanAtten, calling them “unnecessary” and “malicious.”

Williams wrote “evidence gets locked away, out of sight, in an investigation file.”

Nessel stated at an Aug. 24 press conference that her office wouldn’t release additional information on the incident while VanAtten’s case is pending.

“I’m waiting for the [police oversight commission] meeting, I’ve said my peace,” Williams told WKAR. “I want to wait ’till the other people on the commission say their peace and we can decide what to do.”