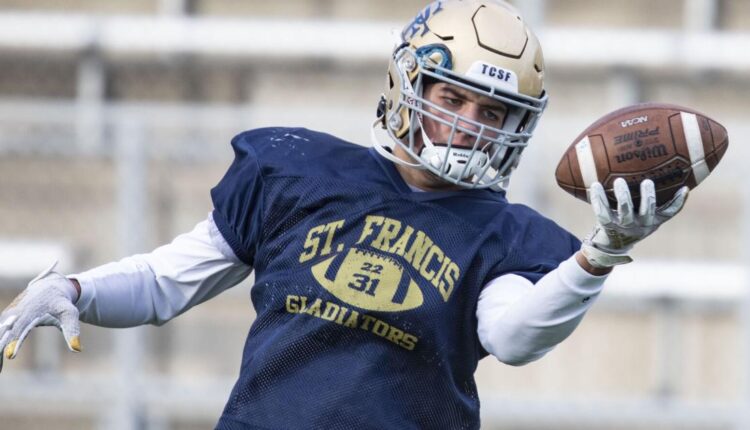 Five years later, he hopes he can do something to reverse those outcomes.

“We’ve had some history with Ithaca,” said Taylor, a senior lineman for St. Francis. “I think back to when I was in middle school. I watched them beat us in 2015 and 2017. So there’s a little animosity there. But they’re a good program, and we’re a good program. So it’s going to be a real fight.”

The Yellowjackets won 27-0 in 2017 and 28-19 in 2015, both in the state semifinals on neutral fields. Those are the only times those two storied programs played each other.

This time around, no. 1 St Francis (11-0) plays No. 3 Ithaca (10-1) Saturday at 1 pm at Thirlby Field on a day that threatens with snow, wind and temperatures in the 30s. That doesn’t take any edge off the Gladiators hosting the Yellowjackets for the first time in Saturday’s Division 7 regional championship game.

“Our record with them in the past is 0-2,” senior tight end and defensive end John Hagelstein said. “So it’s a bit of motivation for us to go out there and play our best, because we want to change that. … I want to change our history with them.”

A win Saturday would put the Gladiators up against either New Lothrop (9-2) — who topped St. Francis in the 2020 state championship game — or Elkton-Pigeon-Bay Port Laker (10-1).

But looking at that would mean slowing down Ithaca quarterback Bronson Bupp first. The 6-foot-3, 210-pound senior scored eight touchdowns in last week’s 63-27 win over Ravenna, four each rushing and passing.

“We have to play our defense, making sure we stay low, play our gaps,” Hagelstein said. “As long as we can tackle a lot better than we did last week and contain him, wrap up, get a lot of hats to the ball, we’ll be alright.”

The Glads also have to contend with Ithaca’s big linemen, on par size-wise with those from Sault Ste. Marie and Lawton, the two teams who had a size advantage on TCSF this season. St Francis won those games by a combined 77-14.

“I think this will be a little bit different,” Taylor said. “It’s the size and the coaching combined. It will be difficult.”

The coaching staffs are the main constant from the previous matchups, although Ithaca’s head coach changed in the meantime. Jordan Hessbrook took over two seasons ago for his uncle, Terry Hessbrook, who led the Yellowjackets past the Gladiators twice.

Hessbrook, an assistant on the 2015 and 2017 Jackets teams after graduating from Ithaca in 2012, said the two quarterbacks have similar impacts on their teams.

Bupp has thrown for 1,722 yards and 18 touchdowns (to only six interceptions) with a 61.4 completion percentage while running for another 1,156 yards and 28 touchdowns.

Sophomore Nathan Mikesell leads the rest of the rushing attack with 716 yards (9.3 per carry) and eight scores. Senior Ethan Hull paces the receiving corps, catching almost half of Bupp’s completions with 43 for 943 yards and 11 TDs.

“Bronson has really stepped into that role and really grown,” Hessbrook said. “They kind of remind me of each other a bit.”

Mikesell and senior Kaleb Peska lead the Jackets in tackles with 85 and 88, respectively. Mikesell also has 10 tackles for loss, with junior defensive lineman Brandon Pass logging 11. Mikesell and Pass also combined for 13 sacks this season.

The rest of St. Francis’ offense is spread out among many weapons. Garrett Hathaway rushed for 651 yards and 13 TDs, Joey Donahue 398 yards and nine scores, and Burke Flowers 496 yards and six TDs. Drew Hardy, John Hagelstein and Flowers each have over 200 receiving yards and a combined 13 touchdown catches.

“We emphasize to the kids not to focus on one kid because then they have another that will hurt you,” Hessbrook said. “Any time you play them, you have to expect a physical game.”

Ithaca rang up 318 passing yards and another 276 rushing on Ravenna, scoring five touchdowns on the ground and four through the air. St. Francis, meanwhile, had a hangover against Benzie Central after playing its starters fairly little in a playoff-opening rout of L’Anse, winning 34-18 as Jaxon Childers kept the Huskies a constant offensive threat.

Ithaca’s lone loss came in the second week against Standish-Sterling, which lost 14-12 to Millington last week in the Division 6 bracket.

Taylor said St. Francis’ senior-dominated team is well aware Saturday is their last game on Thirlby Field, regardless of the outcome.

“It’s crazy it has come to this point,” Taylor said. “You look back on your whole career and you know it’s finally coming to an end. Even if we go all the way, I only have three games left; so it’s just all about enjoying those final moments playing football and hopefully making the best of what I have.”