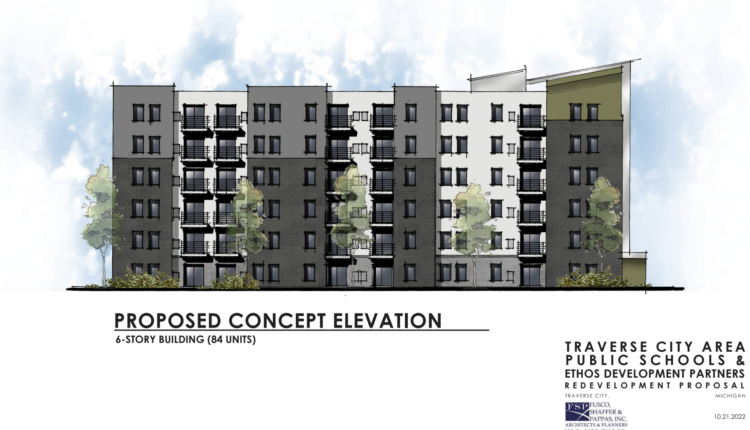 Traverse City Area Public Schools (TCAPS) has received two proposals to convert the district’s administration building into community housing and a separate bid from Acme Township to buy the vacant Bertha Vos Elementary School, with the goal of turning the latter into a “township hall and civic center” with educational and childcare programming, library services, senior center network space, and fire and township operations. TCAPS board trustees will review the bids Monday after previously agreeing to solicit offers for the two properties to see if they could be put to better use.

TCAPS issued a request-for-proposals (RFP) in August for the administration building on Webster Street – recently assessed at about $3 million – and Bertha Vos on Shore Road, appraised at approximately $500,000. Bids were accepted on the two properties through October 26. The RFP garnered three proposals, two for the administration building and one for Bertha Vos. The details of the proposals are as follows:

Proposal 1, Administration Building: Traverse City Housing Commission & Ethos Development Partners
The Traverse City Housing Commission (TCHC) and Ethos Development Partners submitted a proposal with two options to develop up to 84 units of multi-family rental housing on the administration building site. The first option is a four-story, 55-unit building estimated to cost $18 million. The second is a six-story, 84-unit building estimated to cost $26 million (pictured, rendering). Both options call for demolishing the existing building, though the proposal notes that “if it is the preference of TCAPS and the community to preserve the existing building and convert it to housing, the TCHC/Ethos team has extensive experience with historic projects and school conversions .” The 43,560-square-foot property, which is currently zoned R2 (two-family dwelling district) would be rezoned to C-2 (neighborhood center district) for the four-story building or C-4 (regional center district) for the six – story building.

TCHC and Ethos are proposing to buy the property for $100,000 and use a combination of MSHDA funding, private investment, and conventional bank financing to fund the housing construction. “We believe both these options clearly meet the development goals and objectives listed in the TCAPS RFP document and will help meet the demand for quality housing for members of the Traverse City workforce and young families – many of whom will have children that will attend Traverse City Public Schools,” TCHC Executive Director Tony Lentych wrote in a memo to TCAPS.

Lentych noted that TCHC and Ethos have “significant experience developing quality multi-family projects to help meet the housing needs of the communities in which they are located.” He pointed to recent projects including the $20 million renovation of Riverview Terrace and the securing of $15 million in government and private financing for the construction of the 46-unit Parkview Apartments on East Eighth Street, set to be finished next year. The RFP outlines a proposed project timeline of finalizing a purchase agreement in January, finalizing a site plan/securing municipal approvals/obtaining project funding throughout 2023, and officially acquiring the property and starting construction in early 2024, with the goal of completing construction in August 2025

Proposal 2, Administration Building: Community Housing Network, Inc.
The Southeast Michigan-based nonprofit Community Housing Network, Inc. (CHN) also submitted a housing proposal for the TCAPS administration building. The organization is proposing to buy the property for $257,000 and invest $7.5 million into a mixed-income project featuring the adaptive reuse of the building. Approximately 20 one and two-bedroom rental apartments will be housed in the building.

“The units will be targeted as workforce housing,” according to CHN’s bid. “All units will be equipped with amenities that include a refrigerator, stove, wired for high-speed Internet and cable TV connection, and a washer/dryer. It is hoped that each unit will have its own independently controlled HVAC system, although more inspections of the building need to be conducted to determine if this is economically and practically feasible.”

According to CHN, “the size of this building and its prominent location in the heart of Traverse City suggests that the building be redeveloped to retain the historic character of the neighborhood.” The organization said it had experience in other adaptive reuse projects, including the redevelopment of the 90-year-old Thomas Jefferson School in Oak Park and a planned upcoming redevelopment of the historic Garfield School building in Sault Ste. Marie. CHN’s proposed timeline includes applying for MSHDA tax credits in April 2023, commencing construction (if successful in obtaining funds) in November 2023, and finishing the building by November 2024.

According to Acme’s bid, Grand Traverse County has expressed interest in using building space to offer a new Senior Center extension in Acme, while GT Metro Fire “is envisioning using a portion of the building for a new Fire Station to replace the antiquated 1953 station that lacks space and amenities for today’s 24/7 emergency response teams.” Additionally, Northwestern Michigan College is “considering bringing Extended Education Services programming to Acme,” such as culinary, fitness, language, and professional development classes, while Traverse Area District Library is “interested in possibly establishing an ‘east side’ library extension in Acme ,” according to the proposal. Those four organizations submitted all letters of support confirming their interest in participating in the project as part of Acme’s application.

Acme Township Supervisor Doug White wrote that the property would also serve as the community’s new township hall. “We have outgrown our current township hall; the Bertha Vos property will be our new home today and into the future,” he wrote. Acme’s bid also states that the township will “set aside sufficient square footage and outdoor playground space on the site to accommodate a much-needed, licensed child-care facility. It is the township’s intent to use an RFP process to solicit potential daycare providers.”

Acme offered two purchase options, though noted it was open to discussing other deals: either a flat payment of $675,000 at closing or a purchase offer of $800,000 that would be split into a $500,000 upfront payment and the remaining $300,000 balance spread out (with interest) over a five-year term. Because the property is already zoned for municipal facilities and parks as a permitted use, Acme said it didn’t anticipate needing an “extended review or local permitting process” and could begin a design process for the property in early 2023, with the goal of Beginning construction in July 2023. Construction completion and occupancy would be targeted for July-August 2024.

According to a TCAPS timeline published with the RFP, TCAPS trustees – after reviewing the bids Monday – may opt to interview some or all of the applicants about their proposals before deciding how to proceed. Both staff and trustees previously emphasized that going through an RFP process does not obligate TCAPS to sell either property, but they expressed excitement about exploring proposals to better use the buildings for the community’s benefit. “We can accept, reject, or negotiate,” said Trustee Matt Anderson. “For example, there is a need for affordable and affordable housing. I’m excited to see the potential for the Boardman building and the Bertha Vos property.” Trustee Erica Moon Mohr noted that both buildings “have infrastructure needs,” adding: “Seeing public interest through the RFP process is a step in the right direction.”