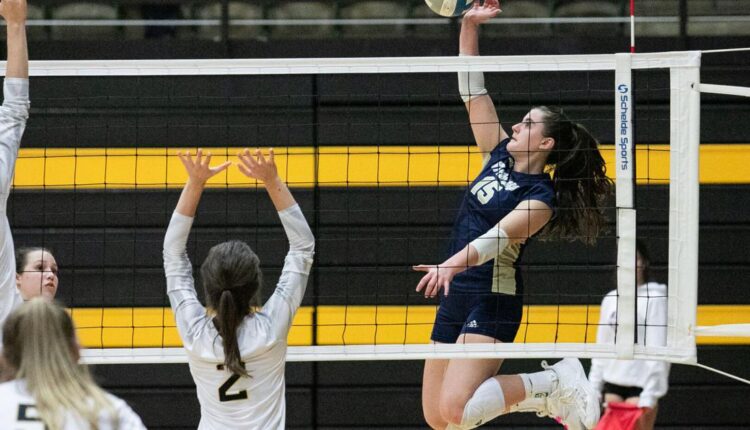 TRAVERSE CITY — Some of the top volleyball teams in northern Michigan got a chance to compete against each other at Traverse City Central High School on Monday before their district games next week.

Every season, local schools plan a quad meet a week before districts to help prepare the girls for some of the similar competitions they would see. Leland (32-12) finished the night going 2-1 — beating Traverse City St. Francis (2-1) and Kingsley (2-1) but losing to Traverse City Central.

“We started the day a little bit shaky, but the competition today was excellent. That’s why we came,” St. Francis head coach Kathleen Nance said. “I think all three teams that we played, played awesome volleyball and helped us prepare for districts.”

Despite losing all three matches, Nance noted there were things that worked that will be helpful once districts begin. One of which is having a vocal player on the court, like senior Alica Revett — who finished the game with six kills and five digs.

“Alica is one of those kids for us who can maintain calm even in times of stress, and her voice is something that the girls are drawn to and helps them settle down,” Nance said.

Leland head coach Laurie Glass said one of the Comets’ goals is how they define themselves on the ability to communicate and hold each other accountable on the court. Glass said they are doing a nice job doing that.

The Comets had an all-team effort on the court with Alexis Luce finishing with 98 assists and 18 digs; Fiona Moord with 37 kills; Flora Mitchell with seven kills, and 17 digs; Maeve Sweeney with 24 kills and 25 digs; and Olive Ryder with 29 digs and eight assists.

TC Central looks to put a stamp in their history books on Wednesday against Traverse City West and claim themselves Big North Conference champions. TC Central hasn’t won the conference in a long time, but first-year coach Emily Wilbert noted how exciting it’s been for the girls on the team to make it possible.

Wilbert added when she became the volleyball coach for the Trojans, she didn’t know she was coaching a team of girls who had the passion and dedication to win.

Despite facing TC West at home on Wednesday, they also face them again at home in the first round of district playoffs. Wilbert said that getting ready for playoffs is a whole new season, so facing TC West next week will be the start of their journey to go deep in the playoffs.

“Hopefully we can come out on top on Wednesday, celebrate winning the Big North but then set that aside and set our place forward on entering the district and knowing that its single-elimination,” she said. “We have to be fully committed and fully present and want to win because it’s going to take 110 percent to continue in districts, regionals, and so on.”

Kingsley also finished the night going 2-1, beating both Central and St. Francis with the help of players all across the board. In the second set against the Trojans, it took a team effort after being down 20-12. Wilbert noted that she thought they let one slip away after the big lead.