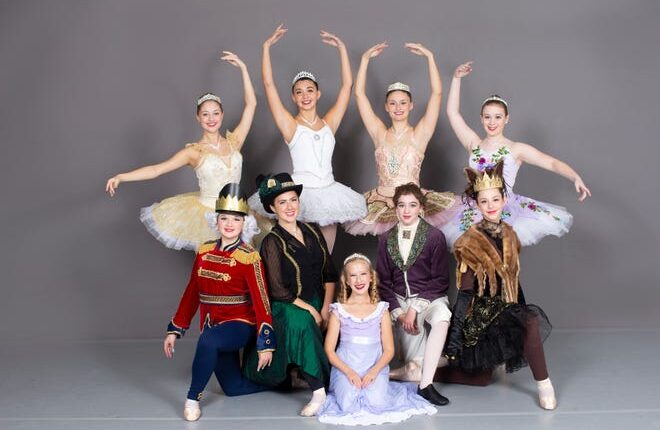 Act I: Thanksgiving marks the return of Lansing-area Nutcrackers

Local ballet dancers twirl holiday favorites back on stage this month and next. Both the Children’s Ballet Theater and the Greater Lansing Ballet Company will be doing versions of “The Nutcracker,” though each production will be different.

The Children’s Ballet Theatre, which has been around for more than 40 years, performs the Nutcracker every year, adding new twists to the traditional Tchaikovsky ballet. This year, they’ll perform under the leadership of Artistic Director Jesse Rand Powers, who took up the mantle in 2019.

Powers is a familiar face to CBT audiences, as he danced with them for eight years as a company member. He then earned a bachelor of arts degree in dance from Grand Valley State University, where he choreographed and led a nonprofit dance organization named Momentum. From college, he went on to dance with and choreograph for companies in New York and Chicago.

Lisa Whiting Dobson, who is active with many dance groups throughout Greater Lansing, said that when Powers was part of the CBT company, he was often cast in duets and now brings his skills to bear as director.

“He’s a big guy and he lifted everyone — he was a partnering machine,” Dobson said. “His choreography is nice. He’s really accomplished and is doing a nice job with the kids.”

The Greater Lansing Ballet Company will perform its variant on the famous ballet Dec. 16-18 at Eastern High School. “The Rise of the Rat Queen” or “Nutcracker II” will skip the traditional party scene and start with the battle, led by the Rat Queen.

Jim McEwan, the artistic director of the Greater Lansing Ballet Company, has a practice of mixing things up with the Nutcracker and presenting non-traditional approaches to it. One year he set the Nutcracker in the 1940s.

The two ballet troupes differ in makeup. While the Children’s Ballet Company dancers are all high school seniors or younger, the Greater Lansing Ballet Company is open to all ages.

The Lansing Community College theater department has a new challenge for its students, one that has roots in 15th century morality plays.

From Nov. 16 -20, they’ll be presenting Branden Jacob-Jenkins’ “Everybody,” a new work based on plays where characters often had allegorical names that described who they were and were designed to entertain while delivering a morale.

“I thought it would be great for a young cast and it tied in to some of the things we teach in theater history,” said Andy Callis, the show’s director. “It was short and would fit in the black box.”

The Dart Auditorium is being remodeled so all LCC productions this year are being held in the Black Box.

In “Everybody,” the character Everybody is searching for Somebody to join them on their journey, a journey that involves an appointment with Death. Meanwhile others, including God, Time, Love, Friendship, Kinship, Cousin, and Stuff, intermingle and complicate the journey.

“The theme is death and who will accompany you to death, but it is a very life-affirming play,” Callis said. “I’m not going to give away the answer, but it is clear-eyed. It’s not sentimental at all. It’s full of wisdom and I love the way the writer makes his points with a ton of humor and also compassion.”

However, this is not a traditional experience where the actors are handed a script, memorize lines and get together for conventional rehearsals. At the beginning of the play is a lottery and five of the actors have their roles that night assigned by the lottery. Only Death, God, Love and Time are unchanging while the others are subject to the random whims of life and chance.

The result is that there are 120 possible different combinations and the actors won’t know their parts until after the play begins. Callis describes it as an interesting rehearsal challenge but one that the students have taken to.

“You have to rehearse all these different combinations, but the nice thing about it is that the students see how it can be done differently,” Callis said. “They’re in rehearsal, they’re watching each other. Everybody has their own interpretation of the roles and certain moments and relationships that they might have a completely different image for the character and that’s fine. They can also steal each other’s bits, which is great.”

“Everybody” will be performed in the Black Box Theater in the Gannon Building, Room 1422 on the downtown LCC campus.