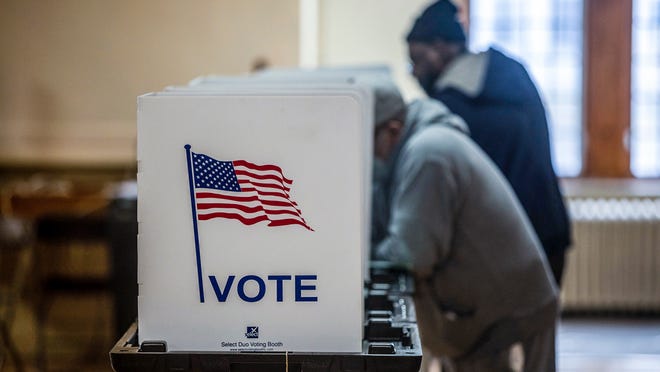 Editor’s note: This story has been corrected to say roughly 55,000 absentee ballots had been counted at Huntington Place, on pace as expected.

Polls have now closed in all of Michigan. Anyone waiting in line when the polls close can still vote.

Many eyes are on Michigan tonight, with races for governor, secretary of state and attorney general at stake, as well as three ballot proposals and a state Legislature that could flip to Democrats for the first time in decades.

We’re following what’s happening across metro Detroit and around the state, so keep your eyes here and refresh for new updates.

Would-be voters were waiting in lines of up to three hours at same-day registration sites at the University of Michigan as polls closed Tuesday, Ann Arbor’s city clerk said.

Election officials also reported long lines at registration sites in East Lansing. Anyone standing in line by 8 p.m. would be permitted to vote, the Michigan Secretary of State’s Office said.

“It’s truly exciting that University of Michigan and Michigan State University students are coming out in droves to register to vote and cast their ballots tonight,” said Darci McConnell, its communications director. “Stay in line. Your voice is your vote.”

Ann Arbor City Clerk Jacqueline Beaudry blamed the long lines on students waiting until their last chance to register, adding that registration sites had been open for weeks in an effort to spread turnout. In 2020, students were more proactive about registering due to the pandemic, she said.

Michigan saw limited disruptions at polling locations two years after challengers at an absentee site in Detroit landed the state in the national spotlight.

At Edison Elementary School in Detroit, a poll challenger on Election Day was “sort of stating to voters that they did not look like they were eligible to vote,” Michigan Secretary of State spokesman Jake Rollow said during an evening call with reporters.

In Ann Arbor, another challenged voters who brought absentee ballots and surrendered them to vote in-person.

Though that’s permissible, “the challenger continued” to raise concerns “as intending to delay or slow the process,” Rollow said.

No one was prevented from voting and both disruptions were resolved, though it’s unclear whether the challengers were removed or left.

With about 90 minutes left before the polls close in Michigan, the scene was orderly and quiet inside Hall A of Huntington Place. Security guards are screening people before they enter to enforce a no weapons ban.

Former President Donald Trump took to his social media network, Truth Social, earlier in the day, writing: “The Absentee Ballot situation in Detroit is REALLY BAD. People are showing up at the polls only to be told, “sorry, you have already voted.” This is happening in large numbers, elsewhere as well. Protest, Protest, Protest!”

Michigan Secretary of State Jocelyn Benson took to Twitter soon after Trump posted, refuting his claims, writing: “This isn’t true. Please don’t spread lies to foment or encourage political violence in our state. Or anywhere. Thanks.”

At 6 p.m. there were no protestors inside or outside Huntington Place.

Duplicate ballot numbers cause hiccup at polls in Detroit

Certain polling locations in Detroit ran into some issues Tuesday morning when its election software was flagging in-person voters for already requesting an absentee ballot.

When polls opened Tuesday morning, election inspectors in some precincts received a message on the electronic pollbook screen indicating the “Ballot # has already been issued as Absentee Voter Ballot,” according to an emailed statement from the city of Detroit Department of Elections.

This message does not mean that the voter who was issued an absentee voter ballot was attempting to vote, the statement said, and instead was a “harmless data error.”

Ballot numbers for precinct voters were being generated that were identical to ballot numbers being used for absentee voter ballots, the department said, and the ePollbook system recognized the duplicate ballot numbers and issued the error message so that no two ballots would have the same ballot number.

It’s unclear how many polling locations and how many voters were affected.

The situation was resolved by adding an additional letter to the precinct ballot numbers to distinguish them from absentee ballots, the department said.

Jake Rollow, a spokesperson for the Michigan Department of State, said on a call with reporters Tuesday morning that voters issued provisional ballots before election inspectors added the extra letter will have their ballots counted. If a voter decided not to vote and left, they should come back and vote and won’t have any issues, Rollow said.

U.S. cybersecurity officials see no attacks on election infrastructure yet

U.S. cybersecurity officials so far have seen no indications of direct attacks on election infrastructure across the United States in the early hours of mid-term voting Tuesday. But they remain on high alert to disinformation operations and efforts to sway voters’ opinions by nation-states such as Russia, China and Iran, a senior official with the Department of Homeland Security’s Cybersecurity and Infrastructure Security Agency told reporters.

The senior CISA official said those three nations continue to use the election disinformation playbook they have in past elections, and that CISA will continue to support election officials nationwide to any risks that may arise because of them.

In the first of three election security media briefings scheduled for Tuesday, the official would not say whether such foreign disinformation efforts are worse than in past election cycles, but confirmed that CISA is especially on guard against Russian malign influence campaigns following yesterday’s claim by sanctioned Russian oligarch Yevgeny Prigozhin that the Kremlin has meddled in U.S. elections and will continue to do so.

‘We got to get back to winning and losing’

Janet Jenkins, a 59-year-old Detroit resident, was excited to see a steady stream of voters at her usual polling location of Pasteur Elementary School in northwest Detroit.

Jenkins brought her 84-year-old mother out to vote with her and said she had never seen it that busy in the morning.

Jenkins was happy to see all the voters in person, because she hopes they realize their votes are being counted.

“At some point, we got to get back to winning and losing,” she said, referring to debunked election fraud theories, such as the false claim that the 2020 election was stolen. “You can’t lose and then complain that it’s stolen and all that mess. No, you win or lose and you brush yourself off or you cheer.”

Jenkins said she also wanted to make sure that women’s rights were protected by voting yes for Proposal 3 and Democratic candidates.

‘People are distracted by the culture war’

At the Salter Community Center in Royal Oak, Sean Kelly, 47, said concerns about book bans in schools partially motivated him to vote on Tuesday. Parents may not like certain books, he said, but they could turn out to be life-saving for other children.

“I think people are distracted by the culture war… . That’s a distraction from the real issues,” he said.

The U.S. Department of Justice will monitor for compliance with the federal voting rights laws in Detroit, Flint, Grand Rapids, Pontiac, and Southfield on Tuesday.

The five cities the federal government is monitoring in Michigan are among 64 jurisdictions across 24 states that the department is keeping an eye on.

The Justice Department has regularly monitored elections in the field in jurisdictions around the country since the passage of the Voting Rights Act of 1965.

Secretary of State Jocelyn Benson called the presence of the Justice Department “an additional partner in the field,” in an interview with several reporters Tuesday morning.

“The presence of the Justice Department, the presence of other partners in the field, including over 50 people from our office who will be working to protect and support clerks and poll workers, is just a reflection of how prepared we are to minimize any potential disruptions and ensure the day goes smoothly,” Benson said.

Bruce Adelson, a voting rights lawyer who worked for Michigan’s redistricting commission and previously served as an attorney focused on voting and elections at the U.S. Department of Justice, said he doesn’t think the department has ever sent that many monitors to Michigan on a federal election day.

The number of monitors is not necessarily indicative of an increase in threats, he said.

“I think it’s more a function of what elections you actually have at issue,” Adelson said. The battleground state has three contentious races for top statewide offices and Adelson noted “heated rhetoric in Michigan and other states” this cycle.

Michigan on track for historic turnout

Expect unofficial election results in Michigan to be completed Wednesday, within 24 hours of polls closing, Secretary of State Jocelyn Benson said to a group of several reporters Tuesday morning.

“Know that as of right now, people are already validating and tabulating those absentee ballots and working efficiently and securely to get things done as quickly as possible,” Benson said.

She said Michigan is on track to have one of the highest turnouts for a midterm election in the state’s history.

As of 1 p.m., voter turnout is higher than expected, said Jake Rollow, spokesperson for the Michigan Department of State. Poll workers are seeing more in-person voters than they’re used to, Rollow said, but they’re processing it well and everything is going smoothly.

There have been 8,828 same-day voter registrations, many of which are coming from college towns.

Rollow said most voters have been able to vote quickly, but there are hours-long lines on the University of Michigan and Michigan State University college campuses – likely due to those registering and voting at the same time.

Rollow said the Department of State has not received any reports of outside interference or intimidation. One poll challenger made repeated impermissible challenges in Ann Arbor, Rollow said, and a challenger stood in the hallway at the Edison School in Detroit and told voters they “did not look like they were eligible to vote.”

All voters were able to successfully vote, and both people have either been removed or will be soon.

‘Important for me and for my daughter’

Mark and Amy Miller headed to the polls at the Pleasant Ridge Community Center Tuesday morning before 9:30 a.m. with their two children Noah, 7, and Abby, 5.

Amy Miller said the key issue that brought her out was Proposal 3, which puts reproductive rights, including an individual’s right to make decisions about abortion and pregnancy, in the Michigan Constitution. “It is important for me and for my daughter, that’s why I brought her along with me today,” said Miller, who is 36.

Miller, who is Catholic, said she voted yes on Proposal 3 and expects that the voting will go in favor of the yes votes.

“It’s important that women are able to take care of themselves,” Amy Miller said. “It’s not necessarily for me about the abortion part. It’s about having that systematic right for healthcare.”

The state of Michigan is more prepared for Tuesday’s election than it ever has been for previous elections, Jake Rollow, a spokesperson for the Michigan Department of State, said on a call with reporters Tuesday morning.

After working through the 2020 election and seeing record-high turnouts in the midst of the pandemic, Rollow said “election officials across the state, I would say, are time tested and ready for whatever comes their way.”

Based on early conversations with clerks and observations at the polling site he visited, there are more people showing up in person to vote than in recent elections and voters are casting their ballots without any issues.

In-person voting in East Lansing excessive, but not same as pre-pandemic elections