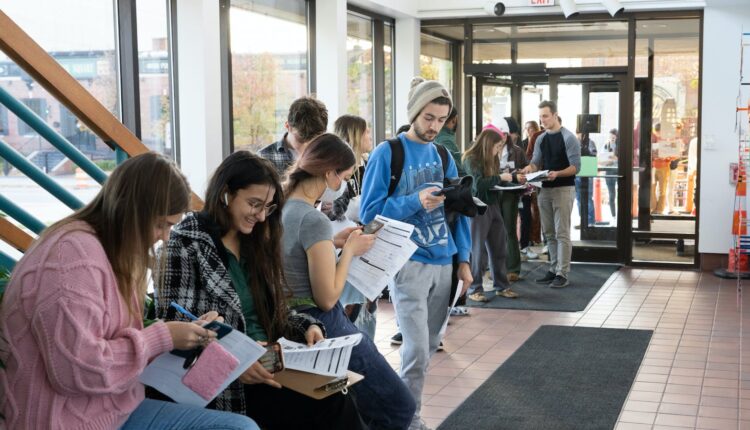 In-person voting in East Lansing excessive, but not same as pre-pandemic elections

Poll workers and observers across East Lansing say that in-person voters turnout was higher than expected, but still hasn’t returned to pre-pandemic levels.﻿

Felix De Simone, an organizer with the nonpartisan group New Voters Project, spent his day outside of East Lansing polling locations to encourage pedestrians to vote. He was surprised by the high turnout, especially among young voters.

“Honestly, I was expecting a lot more apathy. I’m really happy that so many people have actually intended to make their voices heard,” De Simone said.

Poll workers at East Lansing precincts confirmed his observation. They said that in-person turnout has surprised them, but has not reached 2018 midterm election levels.

No major issues or bottlenecks came up this morning or afternoon, though many Michigan State University students did have to go to the city clerk satellite office in Brody Hall to fix issues with their registration before they could vote at their assigned precinct.

Poll workers at some on-campus precincts, such as the MSU Union, said they had sent as many voters to the Brody clerk as they had successfully processed. Others at off-campus locations like the Martin Luther Chapel reported under 10 percent of voters having registration issues. All locations had major turnout, the poll workers said.

A key message among candidates this year was spurring young people to vote. Poll workers in East Lansing said that while more young voters came out than previous years, the total in-person numbers within the age group have not returned to pre-pandemic levels.﻿

Though, one veteran poll worker commented that many – if not most young voters opted to vote by mail.

East Lansing City Clerk Jennifer Shuster encouraged those who haven’t yet voted to head to their polling place.

“As long as you’re in line by eight o’clock at the polling locations, you can still vote. If you’re in line here at our satellite office or at city hall office you can still register, and then vote,” Shuster said, “We’re committed to this, we are excited about the energy that these voters are bringing .. .to make sure they can exercise their right to vote.”

As for absentee ballots, the East Lansing Absent Voter Counter Board has been processing them since 7 am

The city could not give an indication of when they will be finished. At Hannah Community Center, three-quarters of absentee ballots sent to voters had been returned as of this morning.

Share and discuss “In-person voting in East Lansing high, but not same as pre-pandemic elections” on social media.

Race for the New 103rd District