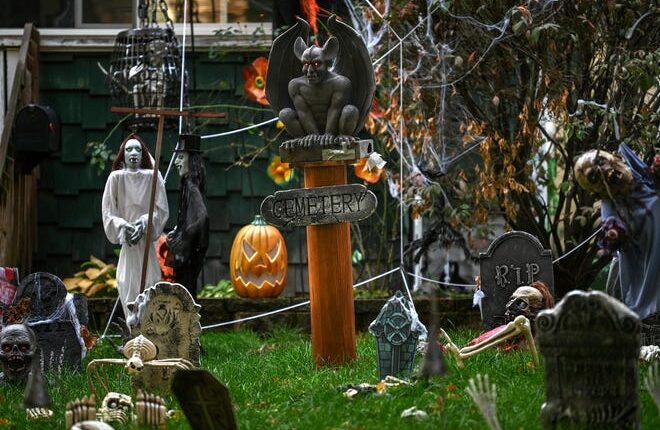 With Halloween on the horizon, many Greater Lansing residents are flexing their creative muscles to transform their homes into Halloween havens. If you’re in the mood for spooky and scary, head out to these Lansing area houses featuring horrifying holiday decor.

A home in the 1000 block of Parker Street in Lansing features an elaborate graveyard with tombstones, zombies and a gargoyle with red eyes keeping watch. Keep an eye out for the child zombie playing on a tire swing.

An unassuming two-story brown house on High Street near Lake Lansing Road is transformed into a monster with a front porch adorned with large, pointy teeth. Two eyes above the second-story windows peer downward keeping a watch on passersby.

Three large skeleton creatures greet you as you come upon the home on Touraine Avenue near West Saginaw Street in East Lansing. The display includes ghosts, large spiders and praying mantises, a witch in the air and a werewolf ready to pounce near the edge of the property. Make sure to spot the wheelie-riding skeleton placed among the amazing colored lights.

A home on the corner of Wood Street and Groesbeck Boulevard never disappoints. A 9-foot werewolf and 12-foot pumpkin-headed skeleton have been added to the display that was one of Lansing’s first to feature the now popular 12-foot skeleton. Look for the dragon pulling a carriage of skeletons and the skeleton horse-drawn funeral cart.