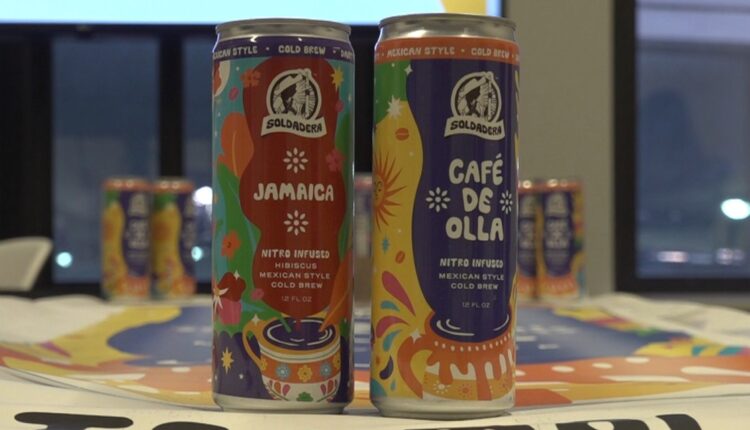 Soldadera Coffee opened in 2017 and has now expanded to 105 Meijer stores across five states. They hope to be in all Meijer stores and gas stations by September.

GRAND RAPIDS, Mich. — Mario Rodriguez-Garcia and Gabriela Rodriguez can’t help but smile when they think about the future. The brother-sister entrepreneurial duo founded Soldadera Coffee together five years ago and now they’re bigger than they’ve ever been.

Soldadera recently became available at 105 Meijer stores across five states. In September, they hope their canned cold brew coffee will be available in all Meijer stores and gas stations. It’s somewhat of a dream they’ve had ever since they were children.

“Growing up in Grand Rapids, we would always go up to Meijer and I would see products on the shelf, and I would always ask my parents “Why can’t we put something out there? You know, wouldn’t that be cool?,” Mario said.

In addition to their expansion to Meijer, Soldadera will also be part of the Sam’s Club Road Show, and their coffee will be sold in the Kirkhof Center at Grand Valley State University when the fall semester begins. Both siblings graduated from GVSU.

The company has even been in talks with Amazon. But they’re not quite ready to take that step yet.

“They have asked for large quantities, but as a small company that’s looking for space to grow and funding to grow, we weren’t able to take advantage of those opportunities,” Mario said.

While Soldadera is looking for that extra space and funding to make further expansion happen, they’re also focusing on the empowerment message of their brand.

“I think it’s like a powerful brand. It’s a way also to reflect as a first generation Mexican American, so I think the empowerment there is huge,” Gabriela said.

Mario and Gabriela’s recipe was inspired by their grandmother, Christian, who was an activist in Mexico, and by Mexican women who served during the 1910 Mexican Revolution.

“They developed the recipe as an energy drink to help the soldiers and themselves. It was the first time that any women actually fought in the war. And so they’re called ‘soldaderas’ which translates to female soldiers,” Mario said.

The siblings say one of the most gratifying things about their expansion has been to receive feedback from people across the Midwest on the product they’ve been working so hard on.

“Once it left in the pallet into the distribution center, and you see it on the store shelf, it’s very surreal in the sense of like, I can’t believe we are here,” Gabriela said.

But even though they’ve made great strides, they both say there is more work to be done.

“It’s not enough. Let’s keep going. What can we do more? What’s the next step? Let’s keep pushing,” Mario said.

NBA Free Company: How much money can the Detroit Pistons spend?