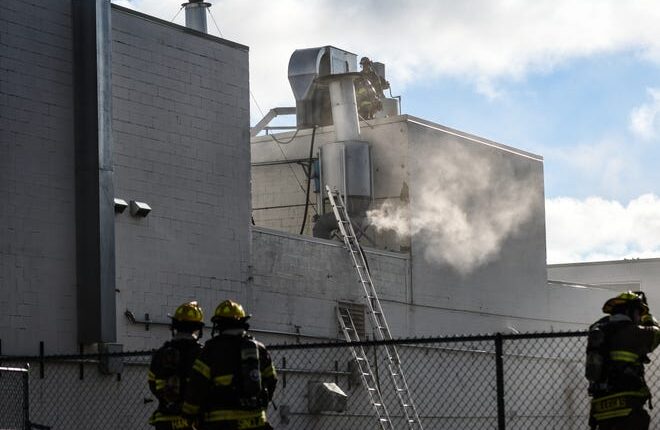 LANSING – A Paramount Coffee Co. facility in Lansing was back up and running after a fire disrupted operations on Tuesday, a company official said.

Firefighters responded as smoke poured from the roofline of the cinder block and brick building across the street from Jackson Stadium, home of the Lansing Lugnuts.

Firefighters fought the fire from both inside the building and the roof. The fire affected the southern wing of the building.

The company described the incident as a self-contained fire in a roaster that caused minor damage.

Lansing Fire Department Battalion Chief Ward Morris-Spidle said the fire was reported shortly after 8 am When firefighters arrived, heavy smoke was showing on the south side of the building.

Morris Spidle said there was an apparent fire in a hopper, a container used to store coffee to roast. The majority of the fire was extinguished, but firefighters were still active at the scene about 9:15 am, he said.

There were no injuries reported, he said.

Paramount Coffee Co. opened in 1935 near downtown Lansing. It has served the community since, creating a “Victory Blend” during World War II to support war efforts, and is one of the largest coffee roasters in the Midwest, according to its website.

The company also has its corporate headquarters at 5133 W. Grand River Ave. in Watertown Township.