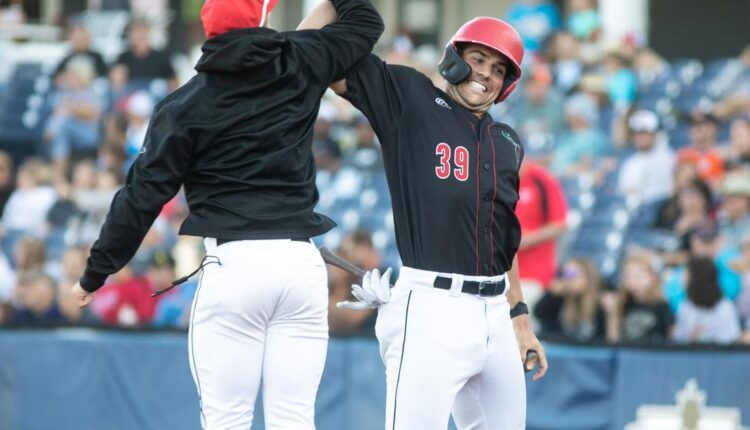 BATTLE CREEK — The Traverse City Pit Spitters might have lost Monday, but they still had reason to celebrate.

Despite falling on the road to Battle Creek 8-3, the Pit Spitters area guaranteed a chance to defend their 2021 Northwoods League title after a loss by the Rockford Rivets sealed a second-half Great Lake East Division championship for Traverse City.

The playoffs begin Sunday in Kalamazoo in a best-of-three matchup against first-half champion Kalamazoo. The Pit Spitters just completed a pseudo-sweep against the Growlers over the weekend after winning twice on Saturday, including a rescheduled game interrupted earlier in the season by inclement weather, and then again on Sunday.

The locations, dates and times of the semifinal and championship games are still to be determined.

The Pit Spitters still have business remaining in the regular season, and that included Monday’s game against Battle Creek.

Traverse City (41-26) entered the two-game series against the Battle Jacks with the playoffs in sight, but the Spitters fell short in an 8-3 loss.

Traverse City righthander Duncan Luntz (3-2, 3.23 ERA), pitched in just two innings, Luntz gave up seven hits, five earned runs with no strikeouts. The Battle Jacks (34-33) scored a run in the first and four in the second.

Luntz got the first two easy outs, but the bases were loaded three batters later. Center fielder Jace Matkin brought the first run in on a fielder’s choice, but it would take the Spitters a few batters to get out of the inning.

Battle Creek continued crushing the ball against Luntz in the second. Shortstop Evan Borst started the four-run spree with an RBI single followed by Billy Hancock’s fielder’s choice and two other runs making it 5-0.

The Pit Spitters had plenty of bases-loaded opportunities but only capitalized on them in the fifth — scoring their only three runs. With an RBI single from Evan Orzech, followed by a two-run RBI single from Camden Traficante to make it 5-3, but that didn’t last long.

Battle Creek responded with a sacrifice fly from third baseman Brycen Sherwood to extend the lead to 6-3. Despite the Spitters’ three runs in the fifth, Battle Creek pitcher Jackson Braden (4-2, 5.17 ERA) contained the Spitters’ offense.

This past weekend, the Spitters took control of the Kalamazoo pitchers. The Spitters played a doubleheader on Saturday, with them only playing seven innings in the first game, but it was a nailbiter with Traverse City winning 4-3.

The Spitters entered the sixth down 3-1 against Kalamazoo, but they scored two runs to tie it and bring up Marshall Toole’s go-ahead RBI triple in the sixth. The second game was a different story. The Spitters mustered 16 runs to win 16-4 in the continued game that they came into with an 11-3 lead.

On Sunday, Pit Spitters starting pitcher Aren Gustafson (2-0, 2.45 ERA) set the franchise single-season record with his 50th strikeout to help lead them to a 9-5 win.

Over the past 10 games, catcher Colin Summerhill has recorded a hit and extended that streak Monday to 11 with a single but finished the night 1-for-3.

The Battle Jacks added two runs in the eighth with a bases-loaded walk and a fielder’s choice to push the lead 8-3. In the ninth, the Spitters had a chance to tack on runs.

With runners on the corners with one out, Battle Creek reliever Brett Sanchez with one pitch got the Spitters out with a double play.

The Battle Jacks this season continue to dominate the Spitters with a season record of 7-4, but they have already been eliminated from playoff contention.

The Spitters play their final matchup against the Battle Jacks Tuesday at 6:35 pm at MCCU Field.