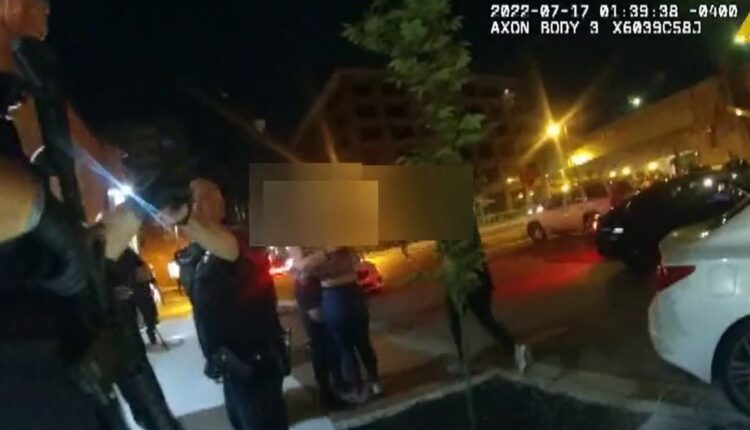 GRAND RAPIDS, MI — Grand Rapids Police Chief Eric Winstrom is touting two officers as “heroic” for using a cruiser to rush a man to the hospital after he was seriously wounded in a July downtown shooting.

Officers Andrew Smith and Laura Saxton were two of many officers to respond to the 1:30 am July 17 scene, described by police as both chaotic and dangerous because of ongoing gunfire in the area. Four people were injured.

Smith started with Grand Rapids Police less than a year ago after earlier serving as a police intern.

He recalled that as Saxton started to help a woman with a leg wound, a vehicle stopped nearby and a wounded man fell out with a gunshot wound. Smith determined he had a head wound.

Smith said he knew no ambulances could respond to him because of the nearby gunfire, so he made a split-second decision to get the man into a cruiser. He dragged the man to the cruiser and Saxton helped pull him into the vehicle.

“His injuries were bad to the point where he needed higher medical care immediately or else he wouldn’t survive the wound,” Smith said.

With all of the chaos surrounding him, Smith said there wasn’t much time to deliberate actions.

“I was just doing what needed to be done at the moment. I didn’t think about it,” he said.

He said transporting an injured person in a cruiser is not typical because of the potential dangers and complications.

Winstrom, the police chief, said he chose to release the body cam video as a way to highlight what he believes were exemplary actions by Smith, Saxton and other officers.

Winstrom said that, following the Uvalde, Texas school shooting, he was asked by many about how Grand Rapids police would respond to a similar shooting situation. He said the July 17 incident offered a glimpse.

He learned that shots still could be heard as police were helping victims.

“I was so impressed by everything,” Winstrom said after watching the body cam videos. “I watched some of that video, I teared up a few times.”

Retrial of 2 suspects in alleged plot to kidnap Gov. Whitmer ready to begin

Girl, 16, this in Jenison area crash