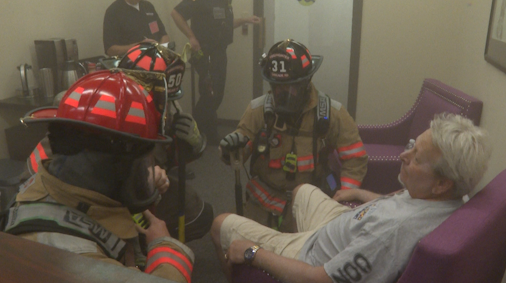 For the first time in at least three years, firefighters went through a full-scale simulated training exercise, focusing on policies in place to rescue people from high-rise buildings.

“We are reactively training and testing out our resources and being able to see how teams work together, making sure our policies still make sense, finding out where those gaps are then closing those gaps with additional training or changes to our policies,” Allison Farole , city emergency manager, said.

First responders made their through City Hall with low visibility caused by the smoke simulator and saved volunteers who played the roles of victims which the department says made the smoke search and rescue drill more realistic. They even role-played injuries occurring with firefighters to see how that would impact the response and the need for additional resources.

Mary Block was one of the approximately 25 volunteers who assisted with the exercise. She has no relation to the fire department. She just wanted to help and learn what to do if she were in a real-life situation.

Bloch offered this advice: “Try to remain calm and think.”

Emergency managers say though the training was for the department it should also be a reminder for you to have your own plan.

“When you go to a grocery store, when you go to your workplace take 30 seconds when you enter and understand where the emergency exits are, where are the stairwells, where the shelters would be if there was a tornado warning,” she said. “It’s up to every single person in the community to be ready for anything.”