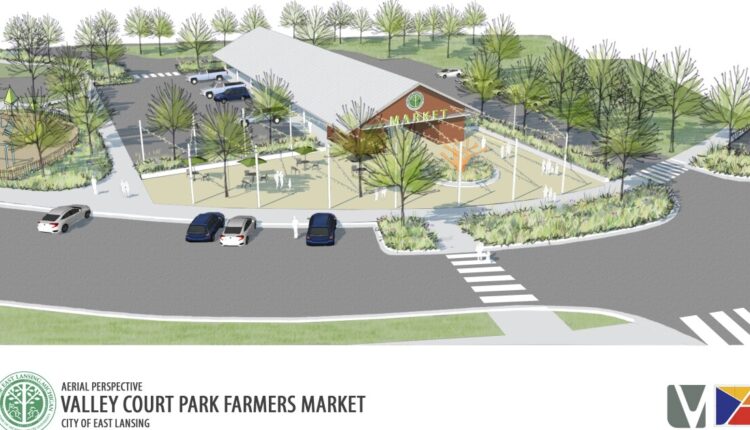 The City of East Lansing is seeking public feedback on a proposal for a new farmers market pavilion in Valley Court Park. The project includes other enhancements for the park as well.

The pavilion will be a permanently covered structure with public restrooms, storage and seating. The project would also enhance the accessibility of the park’s playground.

“We really had a strong idea of ​​what we wanted in this project and now we’re just so excited to kind of take this draft idea out there to the public and get a lot of public input to finish out the vision of the project, she said.

DeShambo said the proposal has accounted for environmental resiliency. This includes building the pavilion in an area to prevent drainage issues.

“We have the opportunity to increase the urban tree canopy, we’re planting new trees, we have the ability to create bioswales and manage storm water in a different, better way,” she said.

The city is also looking into the possibility of powering the park with solar like at Patriarche Park, DeShambo said.

City Planning, Building and Development Director Tom Fehrenbach said the aim is to create a space fit for markets and entertainment, with future generations and development in mind.

“As we move through what is our local approval process we really have multiple chances for the public to engage and to give us feedback and to help really form what will be the final development to take place here,” he said.

Downtown has seen a tremendous amount of development, Fehrenbach says, making open spaces and publicly owned properties important to the overall quality of the area.

“Looking at how successful the farmers market already is in it’s, sort of, pop up kind of framework, knowing that if we can provide a permanent structure not only for the farmers market, but also for the other types of uses that might occur in such a space, there’s lots of really great ideas of what might be possible,” Fehrenbach said.

Fehrenbach said the application approval process has just begun. He adds the proposal will need to make its way through multiple boards and commissions before landing before the city council.

“We are currently envisioning that we will be through this process by the end of the calendar year as we’ll need to then go to final designs, ultimately go out to bid, and then ultimately begin the construction period, so we’re hoping to put this into the ground in 2024,” he said.

Fehrenbach said as a requirement of the MEDC grant, the city will need to complete the project by the end of 2026.

The city will have an informational booth at the East Lansing Farmers Market Oct. 16 during its Autumn Fest. More opportunities for feedback are at the City of East Lansing’s website.

Cade Cunningham is Confident Detroit Can ‘Flip the Nook’

Headlee Rollback Proposals Can Cause Confusion on Local School Ballots