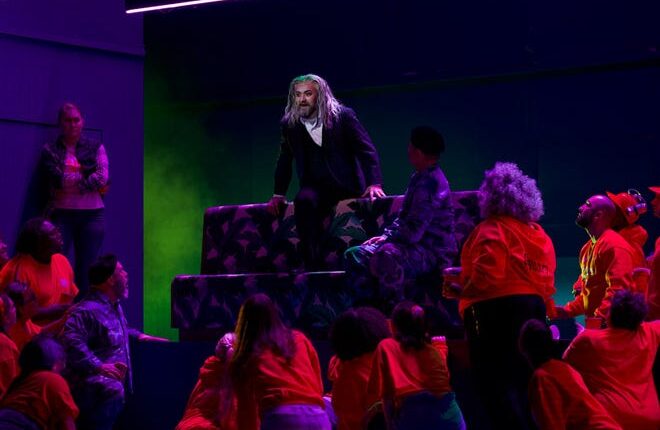 It’s not difficult to re-imagine the classic “Faust,” the quintessential story of man making a bargain with the devil, in contemporary times.

Director Lileana Blain-Cruz had only to look at modern American culture for inspiration to re-create the Gounod opera, which premiered in 1859.

It’s a landscape of football, war, bars and massive churches with neon lights. And Faust is not an aging scholar questioning how he has spent his life but a tech millionaire “who has it all, who has accumulated information and has shaped how the world thinks and moves. And yet, he feels empty.”

“American culture was my contemporary setting and that felt pretty important to me. That was the main governing principle,” says Blain-Cruz, who is Lincoln Center Theater’s resident director. “It’s a production about class and power and loneliness and ultimately faith in something bigger than all our worldliness.”

“Faust” marks the second production of the Detroit Opera’s current season, with performances Saturday and again next weekend. Blain-Cruz first staged this production at Opera Omaha, which features Gounod’s original music and libretto by Jules Barbier and Michel Carre for the Théâtre Lyrique.

The Omaha World Herald called this version of “Faust” a “heavenly debut,” commenting, “Rather than tell a story of heroes and villains, Blain-Cruz managed to show the audience human beings with rare honesty.”

The Tony-nominated Blain-Cruz says she has always been intrigued by “Faust,” about what makes a man sell his life to the devil. Faust strikes a deal for a second chance for youth, vitality and love but his action has disastrous consequences for him and those around him. That theme also intrigues Blain-Cruz — how decisions made by the powerful impact everyone else and “how that still resonates” in modern times.

Blain-Cruz, whose recent projects have included “The Skin of Our Teeth” at Lincoln Center and “Dreaming Zenile” at the McCarter Theater Center in St. Louis, says like Faust, we’re all wrestling with what it means to live and what we’re trying to get out of life. “These themes still resonate … we can all relate to Faust, him living in his books and us living behind our screens,” she says. What is my real life? What is happening outside and around me? Have I missed life itself somehow?

In her modern lens, Faust, part of the 1%, is tantalized with the one thing his money cannot buy.

“Gounod, in this opera of numbers, created a clear dramatic story with people who experience journeys of passion to the point of transcendence,” says Blain-Cruz. “The desire to flesh out these characters is what also makes me so thrilled that we did the first version of this opera at Opera Omaha, and now we do it again at Detroit Opera, with dialogue and additional music that add to the complexity of the characters and their relationships.”

Despite some dark themes, Blain-Cruz describes his version of “Faust” as fun and full of laughs. “It starts out fun and funny,” she says. The story is really invested in human beings and a group of “amazing characters” on a tumultuous journey through their lives and a love story that falls apart.

“I want people to feel things at the end of the show,” she says. “I think it’s a really moving opera. It’s moving because it carries all the complexities of real human beings. You get to delve into their stories and be reminded of the complicated questions about choice and how we live our lives.”

Saturday’s performance marks the professional debut of Reisinger, who is close to earning a master’s degree at Michigan State University. The 27-year-old baritone plays Wagner, who he describes as kind of a frat boy, “life of the party type.” In the original staging, Wagner is Faust’s assistant in scholarship.

“I kind of resonate with this character a tone,” he says. “(He’s) fun to play. The dialogue gives a lot of sustenance to the character … I really like how light hearted this version is. A lot of Faust can be dark and not much fun to watch. This (production) has a lot more depth of character… a lot of funny theater stuff. There are some good moments of seriousness and fun, which is great.”

Reisinger, a Rochester, New York native, is one of five singers in the Detroit Opera’s Resident Artists Program. That program provides comprehensive career development for emerging performers who have demonstrated potential to make important contributions to the art form. He is the only resident artist in the “Faust” production.

Upcoming productions at Detroit Opera during the 2022-23 season include: a revival of Tazewell Thompson’s production of Xerxes (March 4–12), directed by James Blaszko and conducted by Dame Jane Glover; and Ainadamar (April 8-16), appearing in a co-production with Opera Ventures, Scottish National Opera, the Metropolitan Opera, and the Welsh National Opera directed by Deborah Colker and conducted by Paolo Bortolameolli.