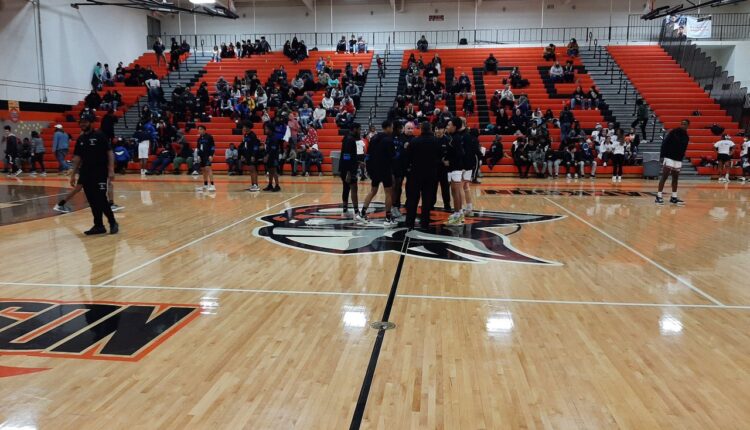 JACKSON – Outside of the first couple of minutes of the game, the Detroit Lincoln King Academy boys basketball team never trailed on Friday in its nonconference game at Jackson.

But the Wolves also never led by much, and had to keep fending off one Viking rally after another, even going to overtime after Jackson tied the game in the final seconds of regulation.

A quick start to that overtime, and some shooting struggles for Jackson during that stretch, helped Lincoln King pull out the 68-61 overtime win over the Vikings.

Heading into the extra session tied at 57-57, the Wolves got quick baskets early in the other time from Noah Rainge and Quavon Sharfner, and free throws from Greg “JR” Brown to take a 64-57 lead. During that same stretch at the other end of the court, the Vikings missed five shots in a row and Rainge grabbed a steal and took a charge.

Lincoln King coach Craig Covington Jr said what he saw from his team down the stretch was resilience.

“We had four kids with four fouls heading into overtime,” he said. “The way the game was called, we just had to not foul, stay close but not foul. They stuck with it, they stuck with the game plan, and we pulled it out.”

Lincoln King was on the verge of wrapping things up in regulation. Up 57-53 with 28.5 seconds left, Jackson’s Terrell White was able to drive for a layup to cut the deficit in half. On the ensuing inbounds attempt, the ball went off the hands of a Wolves player and out of bounds, resulting in a turnover to Jackson giving the Vikings a shot to tie or take the lead.

Inbounding the ball with 10 seconds to go, the Vikings found White in the corner. He missed his attempt at a game-winning 3-pointer, but Tavion Tanner was there to grab the offensive rebound and sink a shot to tie the game and force overtime. Those were Tanner’s first points of the game.

“That’s one of the things we’ve learned; we’ve had some tough games and we understand how we have to fight,” Jackson coach Milton Barnes said. “That’s a good sign of growth and guys understanding it’s never over ’til it’s over. I’m proud of the guys’ effort against a very good team.”

“He’s our best shooter and we’ve got to keep him working and understanding that we need him to make shots for us,” Barnes said. “Hopefully other guys will be able to contribute in other games.”

Savonn Campbell and Cayman Harris each finished with 10 for the Vikings.

It was a balanced attack for the Wolves, who had eight different players score led by Brown with 14. Farria added 12. Carlos Paul had 11 and Rainge and Paris Holland each had 10.

“We just play as a team,” Brown said. “Just listen to our coaches. They tell us the right thing. We run our plays.”

White and Campbell hit 3-pointers to help Jackson take an early 6-5 lead and after Lincoln King established a 13-8 lead, thanks in part to a J’Sean Farria 3-pointer, White answered with another of his to end the run.

Lincoln King’s defense caused plenty of problems for Jackson, especially late in the first and early in the second quarter when the Wolves came away with eight turnovers during an 11-possessions stretch.

“We’re getting better and better every game,” Covington said. “We just move our feet, get in the passing lanes. They really stuck with what we’ve been telling them to do all season. I’ve got a team full of seniors, so when you’ve got seniors and guys who have played varsity for three years, they feel the pressure of the end of the season, this could be your last game, so you get ready for the tournament.”

But Jackson chipped away as Campbell fed Harris in the paint, then scored a pair of baskets of his own, getting the Vikings within a point at 27-26.

Even after Joe Togba hit a shot for the Wolves, Harris answered with a turnaround jumper just inside the free throw line to cut Lincoln King’s lead to 29-28 at halftime.

But Harris ended a Jackson dry spell by knocking down a jumper and White hit a pair of 3-pointers in quick succession, the second with 4:00 to go in the fourth making it a 47-45 Lincoln King lead.