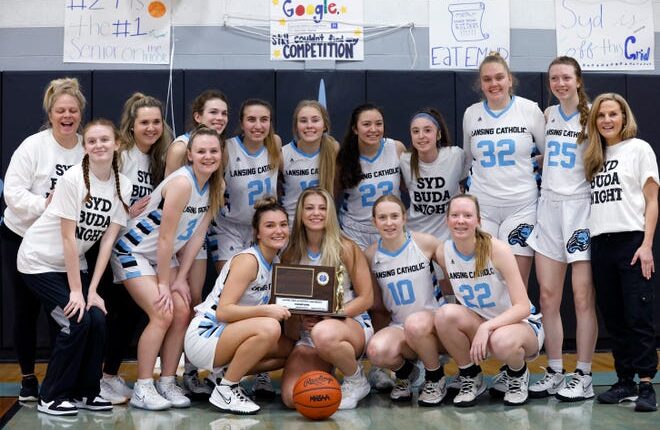 LANSING — On a night where they celebrated their lone senior Sydney Buda, the Lansing Catholic girls basketball team secured a share of the CAAC White title.

The Division 2 No. 7-ranked Cougars earned their piece of the crown with a 64-39 home win over Ionia on Friday.

The victory helped Lansing Catholic complete a strong regular season 18-2 and finish 8-1 in the CAAC White.

“It’s been a long time (since we’ve won a league title),” Lansing Catholic coach Kacee Reid said. “I think we’ve always had a heavy hitter in our league. In the past it’s been Williamston and lately it’s been Portland. It’s just been really hard to try and carve out a share of that.

“We thought we had a pretty good shot at maybe getting one of the Portland games this year. We’re really proud of our girls. (Winning a league title) was definitely a goal of ours as a team.”

CHARLOTTE — The Orioles were led by a game-high 14 points and four assists from Jaelyn Baker as Charlotte picked up a CAAC White win over Sexton. Elise Crossman tallied eight points, six rebounds and five assists and Alyssa Kirchen added on eight points for Charlotte (10-8, 2-8). Za’Moni Roper scored a team-high 12 points and Deja Delgado tackled on seven points for the Big Reds (0-13, 0-5).

Delaney Seaman had 18 points to lead the Yellowjackets to the league victory.

Levee Clark led a balanced attack with nine points for the Gladiators in their CAAC Red win. Sam Cronkright had nine points to lead Eastern.