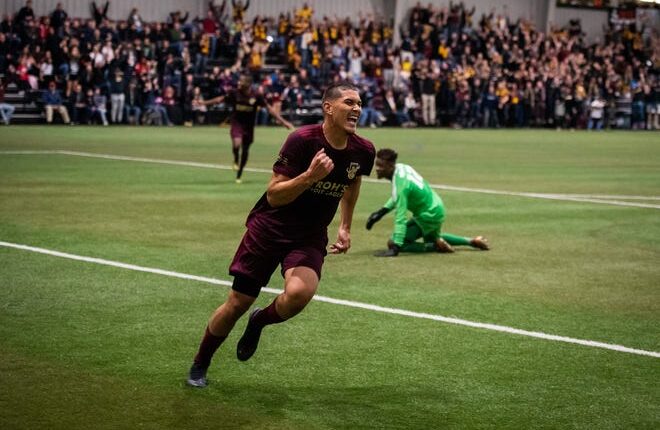 Hamtramck — Now, all that’s left to do is wait.

Detroit City FC suffered a 1-0 loss to Miami FC in Saturday’s season finale in front of the second-largest crowd in Keyworth Stadium history — 7,537 — dropping to seventh place in the table on the final day of the season.

Le Rouge (14-12-8) must now wait for the result of Tampa Bay’s match against New York Red Bulls and Memphis’ match with FC Tulsa before learning who they’ll face in the opening round of USL Championship playoffs.

“I didn’t like the first half at all. I thought we were all over the place,” center back Michael Bryant said. “The wind did have a factor. It was really hard to play, hard to judge certain balls, but the first half was probably the worst first half we played all year.”

DCFC gave away 19 interceptions and had just two shots on target, with five shots total.

As halftime neared, it looked like both teams would be content to head to the locker room knotted at zeroes. That is, until Joaquin Rivas got loose in space behind DCFC’s back line and had an easy strike to push past Nate SteinWasher for a 1-0 lead in injury time.

That marked the first time that DCFC had allowed a first-half goal since July 23 vs. El Paso, ending a run of 12 games without one.

James added that while he thought DCFC could have played better in the first half, the windy conditions contributed to the sloppiness of play.

“I think the conditions (made it seem worse). We gave the ball away a few times, and obviously, giving the ball away in injury time or in extra time cost us a goal,” James said. “So that’s probably why Michael was feeling it was worse at that point, but we might have had similar first halves and we bounced back.”

Le Rouge’s execution in the final third of the pitch was extremely limited. Despite tallying 22 crosses to Miami’s 11, they completed just 65.4% of their passes on the day and struggled to find dangerous chances.

After rolling through the second half without generating much on the offensive half, DCFC looked to get a little juice from the bench when James subbed on Yazeed Matthews and Rhys Williams into the game for Pato Botello Faz and Richard Foster, respectively. Williams was issued a yellow card just six minutes into his appearance.

Matthews had DCFC’s best chance of the game when he charged for a ball in the box during the match’s final stages.

Steinwascher had one save on the afternoon and was named the team’s recipient for the Black Arrow Award, given out annually to the team MVP.

Forward Antoine Hoppenot and center back Stephen Carroll were both doubtful heading into the game with lower-body injuries sustained in the previous match against Louisville. Hoppenot played, Carroll did not, but James said he’s confident Carroll will be ready to go next Saturday for round one of the playoffs.

Midfielder Brad Dunwell, meanwhile, was not available after entering the game as questionable, also with a lower-body injury. James said he took a knock in practice on Thursday that forced him out of training on Friday, and that the team is waiting to hear back on the severity of the injury.