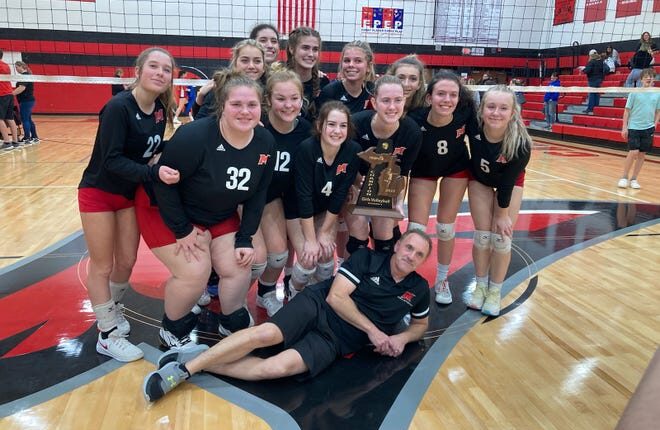 AUBURN HILLS — It took three years for the Cardinal Mooney volleyball team to get back to this point. Much had changed during that time. But the result did not.

The Cardinals fell to Lansing Christian in straight sets (17-25, 10-25, 22-25) of a Division 4 regional final at Oakland Christian High School on Thursday. Cardinal Mooney finished the season at 22-18.

“We started out slowly but we made a comeback in that first game,” Cardinal Mooney coach Troy Parsell said. “In the second, we just weren’t having fun. (Our players) said that in the huddle. Then we went back out in the third, played how we can play and stayed with them. They’re an awesome team. That team is tough to beat. So we did our best.”

“It feels amazing,” Lansing Christian coach Sarah Rottman said. “Just absolutely amazing. We’ve been working a lot in practice about turning the ‘I can’ into ‘I will.’ Sometimes, we try not to lose rather than try to win. So we’ve been really working on that and finishing those last couple points without hesitation. (Our players) really showed that tonight. Especially in a tight match where Mooney found one of our weak spots.”

The Pilgrims played to win from the start. They led by as many as 10 in the first set and began the second on a 9-0 run. After 33 minutes of action, it appeared that Lansing Christian would run away with the match. Yet the Cardinals wouldn’t go quietly.

Cardinal Mooney led for a majority of the third set and at one point held a 13-9 edge. However, it couldn’t distance itself any further. Lansing Christian responded with a 6-1 tear to pull in front, 15-14. The Cardinals hung around but never regained the lead.

“I think we beat ourselves at the end,” Cardinal Mooney senior Sadie Hunt said. “But they’re a good team and you can’t take anything away from them. We were playing hard and we were fighting for every point, so that’s what matters.”

The three-set triumph was a total team effort from the Pilgrims, who saw contributions from every position.

“They all had their little pockets of really good things tonight,” Rottman said. “Anna Jackson, great serving. Eliza Wortz, great hitting. Katelynn Rottman, great hitting. Maddy Rottman, great setting. Grace Leavitt and Lydia Brogan came in for some clutch hits. So tonight, I felt like they really spread it all around and the girls really pulled together.”

As for Cardinal Mooney, it’s time to reflect on the end of an era. This season saw the Cardinals’ fourth straight appearance in the regional tournament. But it also marked the final run for a pair of four-year varsity players in Hunt Claire Campbell.

“They always put the effort in,” Parsell said. “I’ve created a lot of good friends through this (group) with their families. So it’s something special.”

“Sadie and I have been doing this all of our high school career,” Campbell said. “We’ve been with a lot of different girls on our team. We just had so much comradery in this one team this year and we made it really far. So it went really well for us.”

Even with two freshman and one sophomore on the roster, Cardinal Mooney was able to win its fourth district championship in as many years. That meant Campbell and Hunt finished their tenure without a single loss in district play.

“This year really meant the world to me,” Hunt said. “Just seeing as far as we took the program from our freshman year where we came in how much progress we’ve made … this year showed how far we’ve come, how good we’ve actually gotten and that all our hard work has paid off.”

Record-setting number of women elected as governors in midterms ⋆