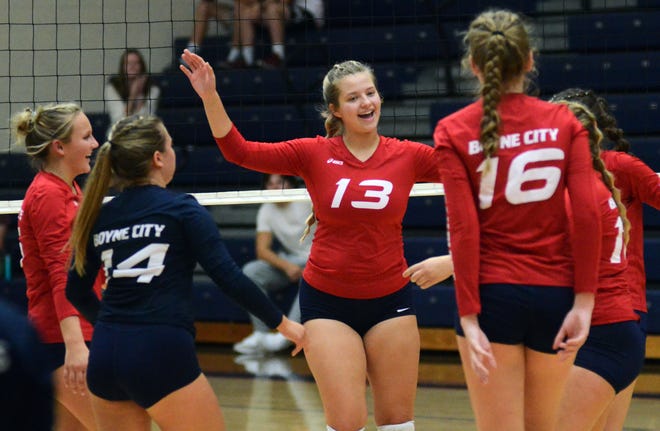 BOYNE CITY — A night after picking up a hard fought five-set non-conference victory on the court, the Boyne City volleyball team returned to their home gym in a Lake Michigan Conference match Thursday.

Meeting Grayling, the Ramblers wrapped things up a bit earlier this time, winning the match in three sets.

“All Ramblers contributed on the night and it was a great way to start off conference play,” Boyne City coach Mallory Slate said.

Boyne City gets back to the court at Kalkaska on Tuesday, Sept. 13.

CHARLEVOIX — The Charlevoix volleyball team ended a week-long layoff from the court with a visit from Harbor Springs Thursday, topping the Rams in three sets.

“These girls are learning to be resilient and not let one bad play affect the next rally,” Charlevoix coach Audra Randall said. “I also enjoy that they are good teammates to each other, which will allow them to grow with each match played. Our senior leadership from Anna Haf and Claire Scholten, but also our two juniors from last year on varsity, Addison Boop and Kylee Rice, are really leading by example with hard work in practice, which pays off in matches.”

Rice led with 10 aces, to go with 10 digs, two blocks and was 10 of 11 on serve receptions. Haf added six aces and 13 of 14 on receptions, Scholten had 15 assists and two kills, Boop had six kills and a block and Abbey Wright had four kills, three aces and served at 100 percent.

KALKASKA — The Boyne City boys’ soccer team got a surprise from Kalkaska on the Thursday road in the form of a 1-0 loss to the Blazers.

The Ramblers totaled just eight shots on goal for the night, with the game scoreless until the final 15 minutes, when Kalkaska tucked one into the back of the Boyne net.

Gabe Zarzycki made four saves in goal for Boyne City, who moved to 2-4-3 overall and 1-1 in the Lake Michigan Conference play.

The Ramblers get back to action Saturday, Sept. 10 at Oscoda.

CHARLEVOIX — Playing in their annual Noah’s Cup game, the Charlevoix and Grayling boys’ soccer teams ended the night in a 3-3 draw.

The game is played annually between the Rayders and Vikings, in memory of Noah Boss, the son of former head coach Jon Boss and wife Laura, who passed away in March of 2015.

Charlevoix picked up goals in the game from Jack Jarema, Charles Kelly and Sam Pletcher.

TRAVERSE CITY — Just days after welcoming in Alpena for their first Big North Conference dual of the season, the Petoskey boys’ tennis team hit the road for another league match, this time against Traverse City West.

And, just the first, success came for the Northmen. A 7-1 win over Alpena was followed with an 8-0 sweeping victory for Petoskey, getting them off to a 2-0 start in BNC duals.

Petoskey will next head to a Grand Rapids Christian hosted quad on Saturday, Sept. 10.