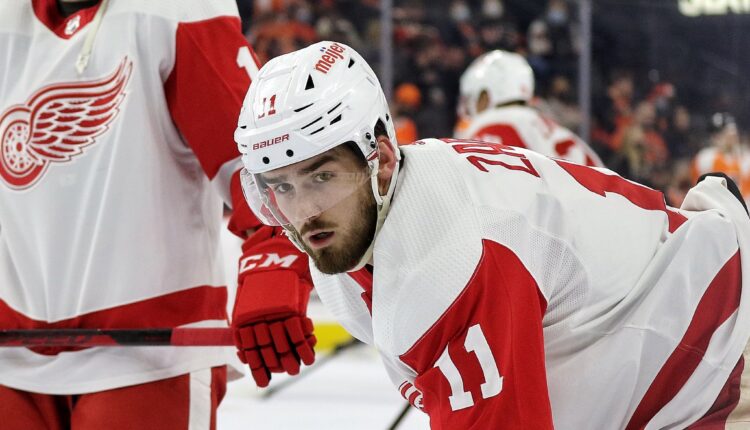 The annual “Red vs. White” scrimmage is always the event that concludes the Detroit Red Wings’ training camp, at least as far as Traverse City is concerned. As is the case with most inter-team scrimmages, the main focus is applying concepts that were introduced over the course of training camp in a game setting. Nobody is out to hurt anyone, and there’s really nothing but bragging rights one the line (who knows, maybe the losing team also splits the dinner bill that night.)

Despite the lack of regular season intensity, there is still much to be gleaned from the scrimmage. For some players, this is their first real opportunity to make an impression on the Hockeytown faithful. For others, this is an opportunity to establish some chemistry with players they might spend some time with throughout the upcoming season. So, without further ado, here are some of the biggest standouts and takeaways from this year’s edition of the Red vs. White game.

Throughout the offseason, the conversation has mostly centered around the new additions to the Red Wings’ organization and how they’ll improve the team this season. However, every action comes with consequences, intended or not. In the case of Givani Smith, a player poised to enter his second full season with Detroit, the path to a roster spot is not nearly as clear as it was last year.

Known for his physicality and willingness to drop the gloves, Smith has just 14 points through 83 NHL games, so offense is not something that you normally expect out him. That being said, the former second-round pick was the only player to score multiple goals during the scrimmage, scoring on a penalty shot and an empty-netter to seal the win for Team Red. The penalty shot came after rookie defenseman Simon Edvinsson accidentally whacked Smith in the face with his stick. Instead of going to a power-play, the Red Wings opted instead to award penalty shots in the event of penalties. Smith buried his opportunity, but not before he was inches away from teaching the young defenseman a hard lesson in being responsible with his stick.

Givani Smith tells Carley Johnston that he “was pissed” about the high stick from Simon Edvinsson and almost swing on him. Cooler heads prevailed. Honestly, I’m sure that incident taught Edvinsson to be a bit more careful with his stick.

It can be hard for a player like Smith to really make a mark in a game where the players are trying to be extra cautious and not hurt their own teammates. Still, not only did he show Edvinsson what can happen when he’s not in control of his stick, but Smith also showed himself tough enough to take the hit to the face and then go right back out there and score on a penalty shot. He may be in tough to make it on the roster as anything more than an extra forward, but Smith has to be proud of what he showed during this scrimmage.

Head coach Derek Lalonde made it clear that fans and the media should not read too closely into lineups over the first few days of training camp, instead pointing to the preseason as when we’ll really start to get an idea of ​​what the lineup will look Like. However, if this scrimmage is any indication, we could see a line that features two wingers that have already shown that they work well together.

Czech wingers Jakub Vrana and Filip Zadina spent some time together on a line centered by Michael Rasmussen. The trio’s best play of the game came during the second half of the scrimmage. Zadina carried the puck into the offensive zone, flipped the puck over to Rasmussen, and then the 6-foot-6 center moved the puck over to a wide-open Vrana who buried the puck in the back of the net. It was a simple play that you’ll see replicated dozens of times over the course of an NHL season, but it’s a promising sign to see them execute on a play like this, especially if the coaching staff is interested in trying out this line during the preseason.

It’s a line that makes some sense on paper. Vrana is the pure sniper that the other two will look to create scoring opportunities for. Zadina is the playmaking winger that, theoretically at least, can create opportunities for Vrana as well as for himself (his developing two-way game doesn’t hurt either.) Finally, Rasmussen is the big rig that can create time and space for his wingers, cash-in on greasy goals in front of the crease, and has the defensive sensibility to get back in the defensive zone. Vrana’s goalscoring ability makes him a very popular guy in Detroit, but the other two have something to prove heading into this season, especially if they’re going to get prime minutes alongside the Red Wings’ most lethal shooter.

One of the returning players that many folks will have their eyes on this season is 22-year-old Zadina. You likely know the story of his 2021-22 season, and so does he. After signing a new three-year deal with the Red Wings in the offseason, the situation is clear: it’s time for the former first round pick to make some real progress this season.

Zadina’s general manager, Steve Yzerman, has mentioned him multiple times when discussing players that can take a step forward and help propel the Red Wings forward this season. The talent has always been there; it seems more often than not that the only thing in the way of Zadina becoming a premier forward for the Red Wings is Zadina himself. He seems more than ready to turn the page and stop talking about the 2021-22 season – and so is this writer, to be quite frank.

In order to do that, Zadina needs to produce results on the ice. During the Red vs. White scrimmage, he was one of the most noticeable forwards. Not only did he help create Vrana’s goal, but he has a few shifts where he was buzzing around the offensive zone, including a shift in the second half where he stripped the puck off of Dylan Larkin’s stick in the defensive zone, carried it through the neutral zone, and then managed to fight off a backchecking Larkin and moved the puck to his defenseman before Moritz Seider knocked him to the ground.

It’s efforts like this that are going to help make the 2021-22 season a distant memory for Zadina and the rest of his naysayers.

As expected, Alex Nedeljkovic and Ville Husso were the goaltenders for the first half of the scrimmage. During the second half of the scrimmage, however, Jussi Olkinuora and Sebastian Cossa were between the pipes for their respective teams. Like Nedeljkovic and Husso, both goalies were solid when called upon, but neither were heavily tested, perhaps due to the low-intensity nature of the match. That being said, it’s still interesting that these were the two goalies that stepped in, considering the fact that Detroit brought a total of eight goalies to camp.

It’s not that surprising to suggest that Olkinuora is destined to play in the American Hockey League (AHL) this season. When the 31-year-old Finnish goaltender was signed in the offseason, it was immediately assumed that he was joining the Red Wings to take over Calvin Pickard’s spot as Detroit’s third-string goaltender, as well as the starter with the Grand Rapids Griffins of the AHL. What wasn’t as clear was who would be joining him in the place fans refer to as “Hockeytown West”.

It appears that Cossa, the Red Wings’ top goalie prospect, is making a strong case that he will be the other half of the Griffins’ goaltending tandem.

When asked about where he wants to play this season, Cossa was quite candid about his desires to go pro rather than spend another year playing juniors in the Western Hockey League (WHL).

“I want to play at the highest level of hockey that I can,” Cossa said. “I think that’s professional this year and…hopefully my game does the talking for itself and allows me to be up for that level.”

In order to secure a spot in the AHL, Cossa will have to get better and better at handling NHL-caliber shots. While he has clearly improved from where his game was at during last year’s training camp, he has looked beatable in Traverse City, especially when going up against top-tier talents. On that note, it was Cossa who Vrana beat on his goal during the scrimmage.

Still, it sure seems like the Red Wings are giving Cossa every opportunity to prove that he belongs in Grand Rapids or even Toledo of the ECHL rather than returning to the WHL this season. After spending most of his summer training and working with coaches in Detroit, it’s clear that the 19-year-old goalie has made progress and is making an impression on the powers that be. His play during the preseason will ultimately decide where he begins the 2022-23 season.

This last point is brief, but it could have a lasting effect on the Red Wings’ plans for their opening night roster:

No update on Robert Hagg (D) just yet. Hagg took a puck to the head during the red and white scrimmage. #LGRW

Furthering the point of nobody trying to hurt anyone during this scrimmage, it’s an unfortunate sight whenever you see a player leave this game due to an apparent injury. From a humanity-based perspective, it’s scary to see something like this happen to someone, regardless of the scenario. You have to hope that this isn’t too serious and Robert Hägg can return in quick fashion.

The on-ice implications of this are fairly simple. Hägg was expected to be a key part of the Red Wings’ depth on the blue line, providing competition for players like Edvinsson and Jordan Oesterle as they all look to lock down a roster spot. If Hägg is out long-term, that could basically gift-wrap a roster spot to Edvinsson. If Hägg can return, we can all breathe a sigh of relief, and the roster competition will continue.

Stay tuned on this one folks.

The Red Wings are now less than 48 hours away from playing their first preseason game as they head to Pittsburgh to take on the Penguins. The takeaways and standouts from this scrimmage will play a role in determining who plays with who during their preseason schedule, and which players will receive a closer look as we inch closer and closer to the regular season. If there’s one overall takeaway from the Red Wings’ time in Traverse City this year, however, it’s how upbeat and eager everyone – from the players to the coaches to the members of the media – seems to be.

After one of the most exciting offseasons the Red Wings have had in recent years, this year’s Red vs. White scrimmage gave us our best look yet at how this season’s Red Wings team is going to be different from years prior. But after seeing Smith take a stick to the face and Hägg take a puck to his, it’s safe to say that everyone – the Red Wings included – is excited to see this team play against another organization’s players.

In case the colder weather and the crowds up in Traverse City aren’t enough of an indication, hockey season is back, folks. Strap yourself in – it’s going to be a fun one.

I am a Western Michigan University alum whose passion for hockey knows no limits. dr Pepper enthusiast. Catch me and my fellow Red Wings writers’ YouTube show “The Hockey Writers Grind Line” which drops every Saturday.