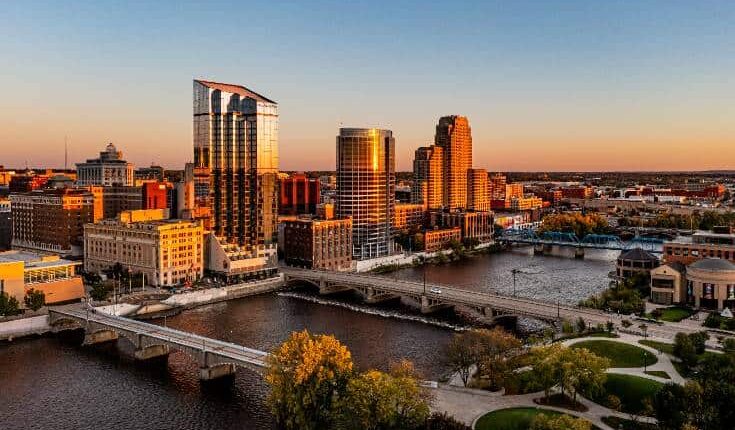 American Craft Beer was recently invited to Grand Rapids to cover its craft beer scene. And although we’ve touched on the city in the past, we’d never spent any real time there and jumped at the chance.

Grand Rapids turned out to be more interesting, more vibrant, and more fun than we ever expected, and its beer scene, which is very impressive, which was only part of the ride.

Any great beer destination starts with a combination of things: the city, its people, and vibe…and of course its beer.

Based in the lower western part of the state just 32 miles east of Lake Michigan, Grand Rapids, Michigan’s second biggest city, is now one of the fastest growing regions in the Midwest.

A historic furniture manufacturing center, Grand Rapids was once known as “Furniture City” and while it is still home to five of the world’s leading office furniture companies, it is its craft beer scene that now draws tourists from around the world. The city grew up around the Grand River, Michigan’s longest river which runs 252 miles from the state’s southern border turning west towards Grand Rapids before making its way to Lake Michigan.

The river’s rapids are legend. Settlers could hear them from miles away which helped guide them to town. But those powerful rapids disappeared with a series of dams in the late 1800s and early 1900s.

Now there’s a growing movement to rebuild the rapids that gave name to the city, an ambitious and audacious effort to return the Grand River to its original state that moves closer with every day.

And it’s that kind of vision that makes this city so cool, that and its beer scene, but more on that in a minute. One of the great things about Grand Rapids is the city’s close proximity to wildlife, nature, and beautiful outdoor vistas. The magnificent Lake Michigan, dotted with cute little villages like Saugatuck, is just 35 miles away. It’s like Cape Cod but without the salt.

You can easily immerse yourself in a winter landscape within minutes of downtown. There’s cross-country skiing, snowboarding, sledding, and ice fishing, all nearby.

You can also enjoy a hike through nature on 60+ local trails whether there’s snow or no.

Grand Rapids is a walker’s paradise that rewards those drawn to the woodlands as well as visitors who like exploring diverse urban neighborhoods in a city renowned for its artisan cuisine and serious craft beer. The winner of two past Best Beer Scene titles (and very much in the running for a third), Grand Rapids is celebrating 10 years as Beer City USA in 2022.

The city is home to Michigan’s strongest beer scene, thanks largely to the presence of the world-renowned Founders Brewing Co. But when Mike Stevens and Dave Engbers launched Founders Brewing in 1997 the brewing landscape was quite different than it is today. There wasn’t anything like craft beer in the city. There were only 1,396 breweries in the US back then. Today there are more than 9,000.

Founders was close to closing in 1999. Taproom sales were slow (Mike and Dave’s only income came from bartending tips) and the brand struggled to find an identity. But all that changed in 2001, when the brewery stepped away from the more traditional amber and pale ales and started taking chances. They adopted the ‘Brewed for Us’ philosophy, began brewing big, bold daring beers, and Founders took off.

Today Founders is the largest craft brewery in Grand Rapids and one of the most successful in the world. But while they remain a cornerstone of the city’s craft beer scene, they are now just one of 41+ craft breweries within a 30 minute drive of the city, all of them doing interesting things. Brewery Vivant, the world’s first LEED-certified microbrewery, specializes in Belgian-Style ales, a sophisticated and nuanced European brewing direction that many brewers nowadays wouldn’t dare take on. Founded by Kris and Jason Spaulding in 2010, Brewery Vivant’s original taproom is based in a visually stunning setting, a funeral home that dates back 1894.

Küsterer Brauhaus brings internationally award-winning locally brewed German-Style beers to a festive Bavarian beer hall setting. It is a dream come true for David Ringler, who in addition to owning Cedar Springs Brewing is the Director of Hoppiness at the recently opened venue.

Located in a bustling downtown enclave that’s already home to New Holland Brewing’s Grand Rapids’ venue, as well as Harmony Hall Brewing and Jolly Pumpkin, Küsterer Brauhaus is but the latest addition to what has become its own beer district. Brewery Vivant will be joining the neighborhood soon when its Broad Leaf Brewery opens this fall. The baseball-themed Mitten Brewing is known for both its beer and its handmade pizza, as well as its commitment to its local community. The award-winning brewery, which is located in a beautifully restored Victorian-era firehouse, excels at rethinking traditional styles. Its Mild Brown Ale, Triple Crown Brown took home a gold medal at the 2022 Great American Beer Festival.

Grand Rapids’ official “Beer City Ale Trail” lists more than 80 breweries within a short drive of the city, and its calendar is filled with beer festivals, events, and promotions.

And when you add in the outstanding beer stores around the city, it’s easy to see why Grand Rapids has become a mecca for beer pilgrims that totally owns the title, “Beer City USA.”

‘We’re not going back’ on LGBTQ+ rights ⋆