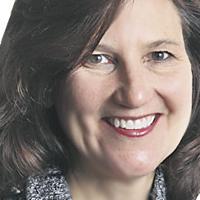 With the pandemic almost behind us, authors are back on tour! We can’t wait to hear their new voices and stories coming our way.

Before I get to our fall season highlights, I wanted to update you on an event we did last spring to discuss events in Ukraine — a partnership event with the International Affairs Forum. We made some technology leaps that were amazing. We put a large screen on the City Opera House stage and beamed in from Ukraine the country’s former Minister of Health and CNN’s senior international correspondent. We asked the audience to donate directly to four different nonprofits using a QR code (new for a lot of people) and garnered more than $125,000 in gifts.

Our new season is eclectic, beginning with Dr. Benjamin Gilmer on Sept. 21. His story was first told in “Dr. Gilmer and Mr. Hyde,” one of the most popular podcasts ever aired on “This American Life.” Ben Gilmer is a big-hearted doctor who takes a job at a rural North Carolina clinic. He soon learns that he shares a last name with his predecessor, Dr. Vince Gilmer, a beloved doctor for decades. Yet apparently out of the blue, Vince had murdered his father. Ben wonders if a medical malady was behind this tragic crime and decides to visit him in prison. So begins a story stranger than fiction and Ben’s quest for justice. April Baer of Stateside Radio is guest host.

Next up on Sept. 29 is Fredrik Backman, international bestselling author of “A Man Called Ove” and “Anxious People” (both made into movies). His new book, “The Winner,” is the third in the Beartown trilogy about a small town obsessed with hockey. His voice is unique, humane, and filled with sudden suspense. Fredrik is flying in from Sweden for his North American tour, and we’re thrilled that NWS was chosen for his 10-city tour. NWS co-founder and no. 1 New York Times best-selling author Doug Stanton is guest hosting this special night at Lars Hockstad.

For Oct. 20, Karl Klockars, our marketing director, signed up Margo Price, a country singer whom he admires a lot. She wrote a memoir about the trials that she suffered on her way up to stardom. It’s a glimpse of just how challenging it is to be a creative in our society, no matter if you write, draw, paint or sing. Guest host is Karl, who has many talents! This is going to be a night to remember. Check out Margo’s music!

Next is David Sedaris, who has visited us once before, and the audience was rolling in the aisles with laughter, disbelief, and delight. This encore (and sold-out) visit promises the same.

For November, we’re pleased to introduce debut author Sofia Ali-Khan, who wrote “A Good Country.” Sofia’s parents emigrated from Pakistan to America, believing it would be a good country — and it seemed that way. But then came 9/11 and the 2016 election, when vitriolic attacks on Islam and Muslims intensified and prompted Ali-Khan to explore if the American dream had ever been a reality for families like her own. Poet, educator, and dancer Ari Mokdad, our new education director and a first-generation immigrant herself, will be guest host. She will talk about challenges of her own after moving to Traverse City. Welcome Ari!

Our last event with author Alice Wong is guaranteed to open your mind. Wong has a lot to say about disability rights with an engaging voice and humor. Because of a medical emergency, she asked author Stephanie Foo to speak in her stead. Our guest host will be Susan Odgers, a Traverse City Record-Eagle columnist.

The National Writers Series is also offering several classes for area youth, from composing a winning college essay to writing a full-length novel. The Front Street Writers, a creative writing workshop for passionate writers, still has a few openings. Aspiring playwrights will have a chance to write new pieces — some of which might see the light of the Traverse City Opera House stage. And later this fall, fourth- and fifth-graders can sign up for Battle of the Books, the most fun ever!

It feels so exciting to be back after a long pandemic slog and — except for the Sedaris event — events will also be simulcast virtually. For details on author events and all of our free classes, please go to www.nationalwritersseries.org.

Anne Stanton is a co-founder of the National Writers Series and is now serving as its interim director. She is also a partner of Mission Point Press, an editing, design and marketing resource for self-publishers.

Where to Find Chiles En Nogada in Detroit