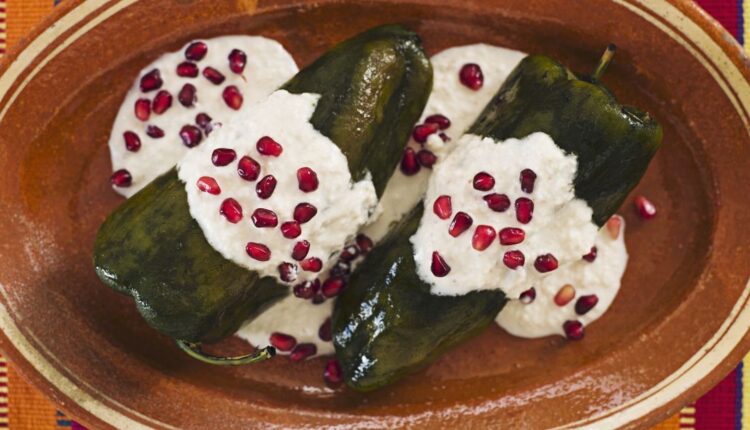 Where to Find Chiles En Nogada in Detroit

While Detroiters have had a generations-long love for observing Mexican culture around Cinco de Mayo, the real celebration for many Mexicans takes place on Mexican Independence Day — also known as El Grito de Indepencia — which takes place on Sept. 16, marking the date in 1810 when Catholic priest Miguel Hidalgo y Costilla made the first cry for the country’s independence from Spain.

The holiday coincides with Hispanic Heritage Month — which takes place Sept. 15 to Oct. 15 — in recognition of several other days of independence that are observed throughout Latin America, including Costa Rica, Nicaragua, El Salvador, Honduras, Guatemala, and Chile.

One way to pay homage to history is to indulge in the beauty that is chiles en nogada. Legend hath it, the dish was originated by nuns in Puebla in 1821 and became known as the national dish because of its resemblance to the green, white, and red Mexican flag. While the recipes for this labor-intensive delicacy vary widely, it’s typically made up of poblano peppers stuffed with a savory and sweet, usually meat and fruit-based picadillo, topped with a creamy white walnut sauce, and garnished with pomegranate seeds.

The specialty isn’t available on many menus around metro Detroit, but there are a couple of mainstays that feature the dish. In addition, here are some other ways to celebrate Mexican Independence Day around town.

El Barzon (3710 Junction Ave) — Puebla native chef Norberto Garita flexes his culinary ability at this fine dining institution, which nods to the cuisines of Italy and Puebla, Mexico, in an upscale atmosphere that includes an expansive wine list, great cocktails, and a lovely brick patio. Chiles en nogada is a seasonal menu option at El Barzón and features a roasted poblano pepper stuffed with shredded beef, pork, and fruit. Instead of using a walnut sauce, Garita’s take involves a pecan cream sauce that’s garnished with pomegranate.

Senor Lopez Mexican Restaurant (7146 Michigan Ave) — This casual taqueria may be known for its takeout-friendly menu of tacos, burritos, and botana, but this spot also features dishes that are otherwise hard to find locally, including the chiles en nogada, which are served with beans and rice. Another house specialty, cochinita pibil, slow roasted marinated shredded pork with the restaurant’s own special Salsa Hidalgo.