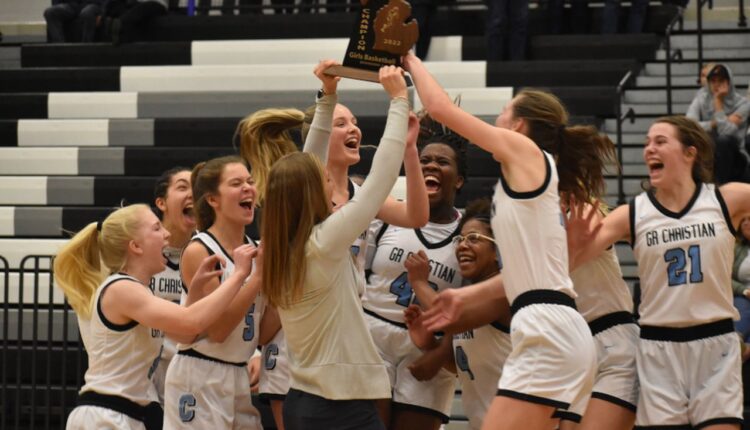 It was evident through the first eight minutes that Friday’s rematch was going to be much different. Christian stormed out to a big first-half lead and cruised to its third consecutive district championship, defeating South Christian 43-31 in a Division 2 showdown at home.

The Eagles led 13-4 after the first quarter and built up a 24-7 halftime lead. The Sailors clawed back, cutting the deficit to six points after three quarters, but that was as close as they would get.

“I was so proud of the girls and the way they came out in the first half,” Christian coach Crystal Strickland said. “Their defensive pressure and intensity, that’s the best we’ve been all year. Defense is something we really focus on. That first helped was the best team defense that we have played for 16 minutes.

“We set the tone early. South Christian made a great run in the second half. We were able to stop the run and go on a little mini run of our own to win the game.”

Christian, 16-6, is a team without a senior, but it has a slew of talented juniors, including Katelyn LaRue and Hannah Sall, who led the Eagles with 15 and 13 points, respectively. LaRue came up big in the fourth quarter, scoring nine of her points, including 4-of-4 from the free throw line.

“Katelyn was so clutch, she was mentally tough,” Strickland said. “She was a leader and she stepped up when we needed her. She wanted the ball in her hands, and she showed a lot of composure for a junior in that position. She made the plays that we needed her to make in those moments.

“Hannah played great as well. I don’t know how many blocks she had, but she ages the game on the defensive end just by rebounding and blocking shots and finishing around the basket.”

Christian knocked off one of the area’s hottest teams in the Sailors, snapping South Christian’s 13-game winning streak. The Sailors made a move in the third quarter, going on a 16-5 run. Lexis Burgess sank a pair of 3-pointers in the third to spark the Sailors’ run.

“I told them at the end of the first quarter that our adrenalin needed to settle down,” South Christian coach Kim Legge said. “We didn’t get into any rhythm offensively. It was so helter skelter for us and I don’t know why. Once we got them settled in, especially in the second half, we came out and ran our offense much better. We have to credit Grand Rapids Christian’s defense. It seemed like they were everywhere.”

South Christian senior Sydney Vis completed her career with a team-high 13 points. Vis became the program’s second player to score 1,000 career points earlier this season. She will play at Hope College next year.

“She’s a sweet, sweet kid, and she brings it every day,” Legge said. “When you form a relationship like that and all of a sudden it’s done, there always will be an adjustment period, especially when you coach a kid for four years. It’s difficult, but she is going to hope and is in good hands going forward.”

White House allows Ukrainian nationals to stay in the U.S. without fear of deportation ⋆