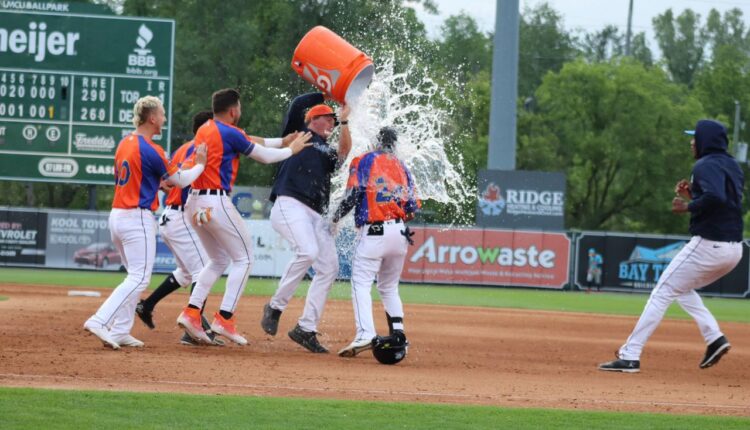 After splitting their latest series in Lake County, the West Michigan Whitecaps returned to LMCU Ballpark to keep their solid play going against their oldest rivals in the Lansing Lugnuts, the High-A affiliate of the Oakland Athletics.

POWER CRUSHES IT IN GAME ONE

Similar to what we saw in the Whitecaps in the 16-run outing against the Captains the week before, the long ball helped them to take the series opener against the Lugnuts last Tuesday. After giving up the first run of the game, West Michigan roared back with a five-run second inning to take the lead, one they did not surrender. Home runs from Colt Keith (9) and Bryant Packard (2), who was just activated off the COVID/Injured List before the series, helped send the ‘Caps to a 9-5 victory.

Daniel Cabrera also had a great game at the plate, reaching base on all five appearances, going 4-4 ​​with an RBI and a run scored. Wenceel Perez stayed hot, going 2-4 with a pair of runs scored himself. Carlos Guzman (3-4) was solid on the hill for the ‘Caps, pitching five strong innings, giving up just one run, while striking out three.

After their Wednesday night contest was added to Friday, it seemed the rest paid off for visiting Lugnuts on Thursday night, with each batter in the lineup picking up a hit in the contest. Lansing drove five runs across home plate, before putting up an eight-spot in the seventh, cruising to a 16-2 thrashing. The loss saw the Whitecaps give up the most runs in a single game yet this season, and also marked the fifth time in 2022 they have allowed 10-or-more runs.

Josh Crouch was the lone star for West Michigan in the lopsided affair, going 3-4 at the plate. To add injury to injury. Star infielder Colt Keith left the game after injuring his right hand when sliding back into first base in the opening inning. He was promptly placed on the injured list following the game, but returned later on in the series.

The ‘Caps and ‘Nuts met in a double-header on Friday, making for the postponed contest on Wednesday.

The first game of the day was a relatively calm one, until the fifth inning when the Whitecaps lit up Lansing for six runs, including a three-run home run for Trei Cruz, to give the home team a sizeable advantage.

The infielder’s fourth home run of the season ended up being the deciding play, as West Michigan hung on for a 6-1 victory.

Daniel Cabrera and Wenceel Perez each had a pair of hits in the win, with both crossing home plate in that fifth inning. Ty Madden pitched another solid game for the ‘Caps, earning his second win of the season by throwing six shutout innings, striking out three batters while giving up just one hit.

Unfortunately, the offense did not carry over into the second game of the night, as the Lugnuts batted around again on West Michigan, picking up 11 hits in the seven-inning affair. Despite the ‘Caps picking up a couple of runs themselves, it wasn’t enough as the ‘Nuts came away with the 7-2 win.

Bryant Packard and Ben Malgeri were the lone Whitecaps to drive in runs in the loss, while Keider Montero, who was coming off a solid start against Lake County, was pulled after 3.1 innings, and getting handed his second loss of the season.

A pair of solid pitching performances made the Thursday night affair between the Whitecaps and Lugnuts incredibly interesting. West Michigan’s Jordan Marks pitched well in five innings, giving up just a pair of runs while striking out five. Lansing’s Blake Beers gave up just one run, picking up four strikeouts in seven innings.

The ‘Nuts two runs came off a Lazaro Armenteros two-run shot in the fifth, before the ‘Caps shrunk the gap to one after Trei Cruz drove into Daniel Cabrera in the sixth. However, the Whitecaps still trailed heading into the bottom of the ninth. Wenceel Perez was able to score on wild pitch, before Jose King hit a sacrifice fly to bring in Josh Crouch for the winning run, giving West Michigan a 3-2 victory.

Daniel Cabrera ended up with two hits in the win, while Corey Joyce reached base three times in the win.

The ‘Caps were looking to come away with another series victory against their in-state rivals with another win on Sunday. They took a 2-0 lead in the bottom of the fourth with Cooper Johnson and Carlos Irigoyen each driving in runs for West Michigan. However, the bullpen was unable to hold off Lansing, as the ‘Nuts scored twice in the eighth and another in the ninth, before Angello Infante came in to close the game out, handing the Whitecaps a 3-2 loss.

Carlos Guzman pitched well in his 10th start of the season, throwing five scoreless innings, striking out four while surrendering just one hit in a no-decision. Ben Malgeri and Austin Murr each had three-hit games for West Michigan, with Murr also scoring a run in the fourth.

CAPS OF THE WEEK

Malgeri had himself quite the series for the ‘Caps. In the five games he played in the six-game set, going 7-13, driving in a pair of runs, while scoring twice himself, leading the team with a .692 slugging percentage last week.

The Whitecaps remain comfortably in fourth in the Midwest League East coming into this week’s action. Their 26-31 record has them sitting four games back of the third-placed Lake County Captains, and 10.5 behind the division-leading Dayton Dragons. West Michigan is also now 6-5 in the month of June.

They now get set for more inter-division action, as the head to Illinois for a six-game series with the Peoria Chiefs, the High-A affiliate of the St Louis Cardinals. The Chiefs are 25-32 on the season, placing them fifth in the West division, 12 games back of the league-leading Cedar Rapids Kernals. They come into Tuesday had won four of six against the Quad City River Bandits, and so far 7-4 this month.

You can watch and listen to the Whitecaps all season on MiLB.TV

Check out the Midwest League standings and results here

Detroit Lions LBs must enhance. How Kelvin Sheppard plans to do it