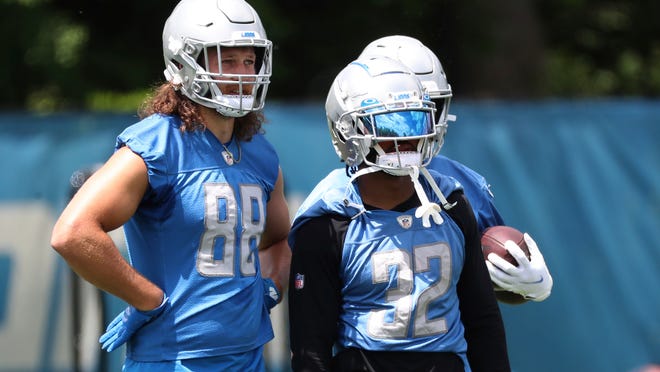 Detroit Lions LBs must enhance. How Kelvin Sheppard plans to do it

It wasn’t that long ago Kelvin Sheppard sat next to Jarrad Davis in the Detroit Lions practice facility, pouring over film while listening to Al Golden as the team’s linebackers coach in 2018.

Fast forward four years and Davis is no longer expected to be the team’s star of the future. He’s a free agent from the New York Jets, who is making less in Year 6 than he did as a rookie.

Sheppard, whose final season of his eight-year career was spent with the Lions, is now Davis’ position coach. Sheppard ended his playing days with seven games in 2018, making one start and recording five tackles.

The new dynamic was an adjustment at first, but as the two have settled into it, it’s set a tone for the rest of the room.

“To see him humble himself where he’s not walking in as a first-round quote unquote starting linebacker, he’s walking in as a free-agent guy who took a one-year flyer type contract and has to earn everything he’s getting,” Sheppard, 34, said. “The younger guys in the room, I lay it all out there for them. They know I played with JD and how I feel about him, but he’s not excused by the standard of the room.

A LOT TO LIKE:Aidan Hutchinson’s work ethic turning as many heads as his talent

Sheppard, entering his second season on the Lions’ staff, said it’s his responsibility not to let his relationship with guys he played with get in the way. He also must make sure he’s putting the best unit on the field and holding everyone accountable.

“It’s kind of the same dynamic I had in my room last year with Romeo (Okwara),” he said of when he coached outside linebackers. “Like me being closest to Romeo, a teammate of his for three years (with Giants and Lions), a true friend to him outside of like coach-player relationship; if I’m able to really curse him out every day and coach him hard, the other guys are like ‘oh man, if he does it to him, I have no choice but to fall in line.'”

There has been an increased sense of competition on the roster this offseason, and that is most evident among the linebackers. There are no clear-cut stars at linebacker, but the race for playing time, as head coach Dan Campbell framed it, will be “a bloodbath.”

“The guys in my room are No. 1 trying to make the team when they come to training camp and No. 2 carve out a role,” Sheppard said. “And the best way to do that is to be a versatile player.”

Sheppard singled out Alex Anzalone as clearly the one who has the most “time on task” in the room and says he will be among the first-stringers to open camp. Still that him nothing — even if he was likely guarantees the best player over the middle last year and he has showed continued growth this spring.

CARLOS MONARREZ:Judging by minicamp, Lions are in for a long, rough training camp

“That doesn’t designate him a starter,” Sheppard said. “The things we did last year are not acceptable for the standard that’s been set this year, so don’t tell me about what a guy did last year. I don’t want to hear it.”

Derrick Barnes, a fourth-round pick in 2021 who is one of the most capable guys athletically on the team, struggled as a rookie. He ranked in the bottom eight linebackers in grades published by Pro Football Focus, in a season where he played fewer than 40% of the defensive snaps and had 67 tackles, two sacks and four tackles for loss.

Sheppard, who talked highly of Barnes during rookie training camp, says he always liked his raw talent and this year moving him off ball should let him use his athletic ability in space to make plays.

“I’m even more excited about (Barnes) right now,” Sheppard said. “He’s done everything and more that I’ve asked. A lot of people around the building say they see a new guy, but I see a guy I always thought was there.

“It starts with a coach believing in a player to unlock the most out of him … that guy man, the sky is the limit.”

That’s the final key to Sheppard creating a cohesive room that can work and play above what is expected of the unit — belief.

Barnes, Anzalone and Davis all ranked near the bottom of the league over the middle according to Pro Football Focus.

Malcolm Rodriguez has “green dot” (which means three-down linebacker) capabilities, said Sheppard, as one of the quicker learners on the team, but he’s still a rookie sixth-round draft pick.

James Houston, who led the FCS in sacks a season ago, has bounced inside and outside as Sheppard and the staff try to figure out what best suits the rookie, for whom the game is still moving a bit quickly.

The competition will work itself out as training camp in late July turns to preseason in mid-August.