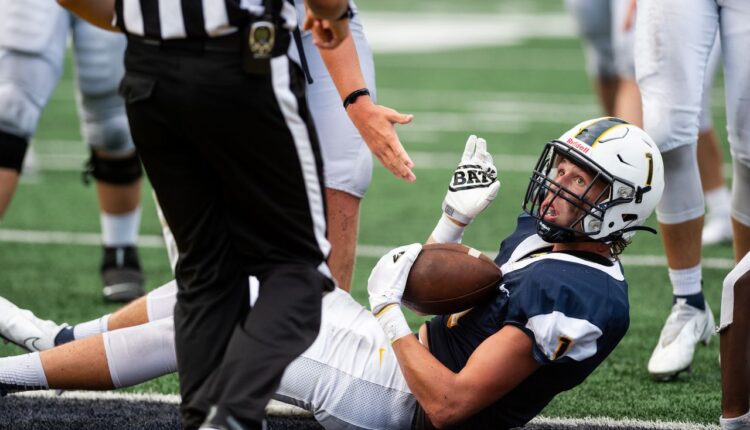 Vote for Grand Rapids Football Player of the Week 9

Football players across the Grand Rapids area did not go out quietly as far as the regular season was concerned Friday night.

Grand Rapids is unveiling its Week 9 Player of the Week 9 Poll below, and it is filled with candidates who had big performances.

The playoffs are next, but first let’s crown the Player of the Week. Vote as many times as you want through 9 am Friday.

The OK Gold champs received another big performance from Jake DeHaan, who was 21-of-28 passing for 348 yards and six touchdowns in a 47-15 win against Forest Hills Eastern. He also rushed for 87 yards and two scores.

Gordon had three catches for 109 yards and two touchdowns for Coopersville, which beat Spring Lake 31-23.

Holman rushed for 268 yards and four touchdowns, leading Zeeland West to a 58-8 win over Union.

Kloska rushed for 262 yards on 34 carries and five touchdowns to help the Falcons beat Unity Christian 39-18 to earn a share of the OK Blue title.

Loeb rolled up 212 rushing yards on 15 carries, and he scored three touchdowns in the Chix’s 28-16 win against Wyoming.

Catholic Central beat Thornapple-Kellogg 35-7 in its regular-season finale, and Mikolay had eight catches for 98 yards and two touchdowns.

Poot returned a punt 45 yards for a touchdown to give the Rams a 7-0 second-quarter lead, sparking Rockford to a 38-15 win at second-ranked Caledonia. Poot also had four tackles.

Vanderveen had four catches for 110 yards and two touchdowns in Hudsonville’s 56-20 win versus Grand Haven.