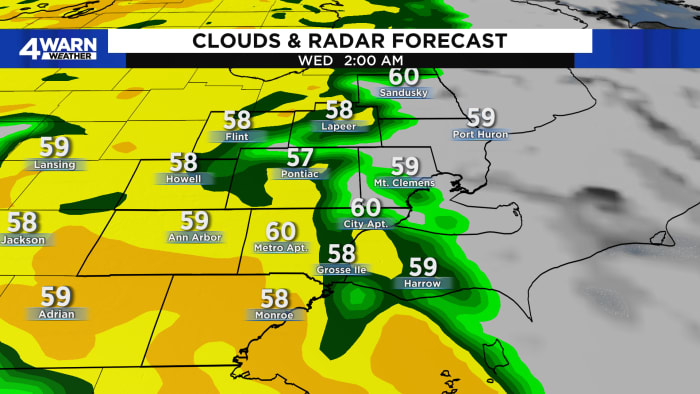 As we work through the evening, expect mainly clear skies for most of the night, but after midnight tonight, as a little more moisture moves into the region, we will bring more clouds into the area as we head towards sunrise in the morning, with skies becoming partly cloudy. Overnight lows remaining in the 50s tonight.

We will keep a filtered sunshine into the forecast for the start of the work week on Monday. A little more cloud cover can be expected before the skies go mostly cloudy late in the afternoon and into the evening hours. High temperatures running 10°+ above average once again as we work into the lower 70s by Monday afternoon.

Our next chance of rain moves into the region as we go after sunset on Tuesday; this is another cold front headed our way. Rain showers will stick around as we head to the middle of the week on Wednesday, with temperatures falling back to near average into the low 60s by Wednesday afternoon.

We will keep the rain showers in the forecast early on Thursday morning; they should be prior to sunrise. And then we break into filtered sunshine as we head throughout most of the day. High temperatures remain near average in the upper 50s by Thursday afternoon.

Dry weather sticks around as we head into the end of the week on Friday, so expect a little more cloud cover rolling into the region. Mostly cloudy skies can be expected, with highs going back into the 50s once again by Friday afternoon.

We will keep a mixture of sunshine and clouds into the forecast working into the first part of next weekend. High temperatures just a few degrees warmer, heading back into the upper 50s to near 60 degrees by Saturday Afternoon.

With more working moisture into the region, expect more clouds than sunshine for the end of the weekend on Sunday. High temperatures right around average into the upper 50s to 60 degrees by Sunday afternoon.

Vote for Grand Rapids Football Player of the Week 9